The NMU hockey team travelled to Houghton, Mich. this week to face-off in a non-conference game against the Huskies after splitting their weekend at home against Ferris State, losing to Michigan Tech with the largest scoring difference since 1997. 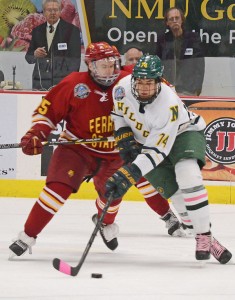 NMU head coach Walt Kyle said the weekend leading up to the game against Tech was a better show of the Wildcats’ abilities.

“I thought it was a good weekend,” Kyle said. “We had a number of great opportunities on Friday night, but we weren’t able to score. On Saturday, the pucks went in for us. I thought we were tighter defensively on the second night, as well. The guys brought forth a lot of energy on Saturday. I’m never happy at losing at home, but there was a good quality of play.”

On Tuesday, the Wildcats started from behind during the first two periods as they gave up four goals in each. The game marked the first time since Oct. 18, 1997 in which NMU gave up eight goals to MTU.

NMU tallied nine penalties versus Tech for a total of 29 minutes, while Tech tallied five.

On Saturday, Feb. 9, the Wildcats earned their first shutout of the season against Ferris with a score of 3-0. Coreau said the first shutout was a welcome change after a three-game losing streak.

“This is something that you work for every night,” Coreau said. “It’s only my second shutout in my college career, so they don’t happen very often.”

Sophomore forward Mitch Jones put the ’Cats on the scoreboard 8:09 into the game with a shot from senior forward Kory Kaunisto and junior defenseman CJ Ludwig. The goal was Jones’ first of the season.

Jones said changing up the lines and trying new tactics played a big factor in the weekend’s series.

“We have been trying some different players in new places,” Jones said. “We have been hoping that would pay off and it finally did. We are all confident, but, in the back of your mind, when you are not producing, it takes a toll on you. I think we did better on the powerplays, as well.”

Sophomore forward Reed Seckel scored the second goal during the second period of the game, assisted by senior forward Matt Thurber and freshman forward Darren Nowick. Junior forward Stephan Vigier closed out the night’s scoring with his fifth of the season. Assisting the shot was Jones and Thurber.

The Wildcats outshot the Bulldogs 33-19, with Ferris goaltender CJ Motte saving 30 shots in the crease. According to NMU Press Box, Coreau’s only other shutout in his CCHA career was at Bowling Green on Feb. 11, 2012.

On Friday, Feb. 8, the ’Cats took a loss of 3-1 away from the Berry in their opening game against Ferris.

Kyle said while the ’Cats could not captilize on opportunities during the first night, the actual game was a good match-up.

“I thought it was a good effort,” Kyle  said. “It is easy to get mad when you lose, but I always try to judge quality of play. We gave them seven shots in the last two periods and one of them was the empty-net goal. We had some opportunities. We just didn’t capitalize on them.”

The Bulldogs started off the game with a two goal lead going into the second, clinching the game with a third goal in an open net. During the third period, freshman forward Ryan Ansley earned the Wildcats’ only goal of the night and his third of the season. Vigier assisted Aynsley’s goal.

Motte stopped 24 shots in the Ferris crease, while Coreau stopped 18 for NMU.

The Wildcats return to CCHA gameplay next week when they travel to East Lansing to play Michigan State University. On Friday, Feb. 15, the game will be broadcasted on the Big Ten Network at 6:35 p.m. On Saturday, Feb. 16, the game will be televised on Fox Sports Detroit at 7:35 p.m. in commemoration of Wildcat Night Across the County.