The Northern Michigan University women’s track and field team traveled to Allendale, Mich. last weekend to compete in the GLIAC Championship, where the Wildcats earned a tie for 10th place. 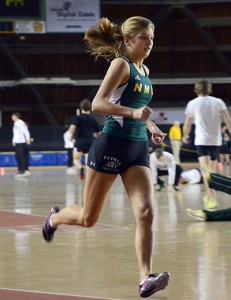 The GLIAC Championship, hosted by Grand Valley State University on Friday, Feb. 22 and Saturday, Feb. 23, is an event held each year for the teams that compete in the GLIAC. Grand Valley won the event with a score of 229.5 points.

Head coach Chereé Hicks said despite finishing in tenth place, she was more than pleased with how the team performed.

“I was excited to see the team really come together and give absolutely everything they had,” Hicks said. “We had a lot of personal bests and even a school record broken this weekend. No one can ask more out of a team than that.”

Junior Mallory Celaya broke the school record for the 5,000-meter run with a time of 18:12.29. That run was also enough to get her an eighth place finish in the event. Junior Chelsea Farquhar and sophomore Olivia Howard competed in the event, as well. Farquhar took 15th with a time of 18:35.69 and Howard finished, just four spots back, in 19th after running for 18:42.93.

Sophomore Brittni Wirtz earned the highest finish for the Wildcats over the weekend. Wirtz competed in the 60-meter dash and placed fourth with a time of 7.75 seconds.

Wirtz also earned a personal best in the 200-meter dash after placing 15th with a time of 26.25 seconds.

For the field events, senior Delaney Lovett placed sixth place in the triple jump after clearing a jump of 10.82 meters. Freshman Megan Strait competed in the weight throw and took 26 after a toss that went for 11.38 meters.

Lovett said she noticed a bigger increase in the competition between the Northern Challenge, which was held on Saturday Feb. 16, and the GLIAC Championship.

“It was interesting finishing in sixth,” Lovett said. “I actually jumped the exact same distance last week at home and it was good enough to get the win. This week was much more competitive so I am not going to be too disappointed.”

In the indoor pentathlon, Brooke Granquist earned a combined total of 3,073 points and finished the event in eighth place. Granquist’s top finish came in the shot put event, where she threw for 9.65 meters. Senior Kendra Bassitt from Ashland University won the pentathlon and scored 3,648 points.

Granquist said she was excited to score a point for the the team and that she knew she had to step it up to make sure she earned the point.

“I was really happy to earn a point this weekend,” Granquist said. “I knew the competition was going to be tough going into the 800-meter run and I just stayed focused and got it done.”

Hicks said she doesn’t see a difference between the two types of track and field seasons and she is expecting the same success from the team.

The next competition the Wildcats will be participating in the St. Norbert Twilight on Thursday, March 28 in De Pere, Wis.