Amongst the many projects ASNMU has been working on, two programs that they hope to bring to fruition before the semester is over is the Wildcat Market and the Wildcat Wallet initiative. 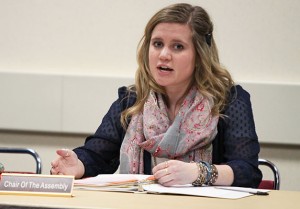 The Wildcat Market is a program that existed previously and was an opportunity for students to come together and sell items they had handcrafted.

“I was engaged by a student who had been a regular at the market, and she was concerned about the fact that Wildcat Market was not happening because they had specifically made room in their schedule for it by not taking classes or scheduling work during that time,” said Vice President Amber Lopota. “So not only were they losing out on work hours they could have been working, but also on the income from the Market.”

According to Lopota, two representatives who are no longer with ASNMU brought the idea of bringing Wildcat Market back to the students.

At the beginning of last semester, they worked with the administration and were able to secure a location in the atrium of the University Center, just outside the NMU Bookstore and Wells Fargo area.

“The program seemed to do fine until the end of the fall semester,” Lopota said. “When we returned from winter break to start winter semester, the Wildcat market was nowhere to be found. The ex-representatives stated they had to have some meetings to ensure the continued progress of the program and then we heard nothing.”

Lopota hopes to see it up and operating again for the last six weeks of the semester.

Another program ASNMU hopes to re-start is Wildcat Wallet, a student discount program that is offered to NMU students that allows them to get discounts from local stores. An example of this is getting a free taco at Taco Bell just by showing them your NMU ID.

One of the actions ASNMU plans on accomplishing to improve the program is calling more local business asking if they will participate in the program. However, no official date is set for that, according to Goldberg.

Goldberg hopes the steps that are needed to continue this program will be done within the next few weeks so that students can benefit from more discounts that various stores can offer.

Any student can help ASNMU with working on Wildcat Wallet. Students who want to get involved should stop by the ASNMU office and talk to a representative about it, according to Goldberg.

While not discussed at the meeting, the Safe Rides Program is going to be available for anyone who needs a sober ride home this weekend.