In a University Forum held on Tuesday, March 19 in Jamrich 103, interim President David Haynes discussed, among other things, the university’s continued focus on NMU’s brand perception and identity, as well as on state, national and international enrollment and recruitment. 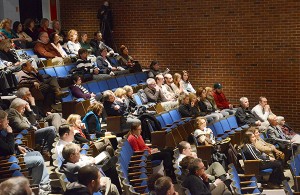 The forum drew a large crowd, which was made up of mostly faculty and staff members. Other campus issues — such as what parking will be available when mobilization of the new Jamrich Building begins on Monday, March 25 — were also discussed.

Haynes said among his many goals for the coming months, enrollment and establishing a university identity are among his top focus.

Having traveled to China, the United Arab Emirates and Korea over the course of his time at NMU, Haynes and the NMU Board of Trustees have been focusing extensively on the recruitment of international students in recent weeks.

“The significance (of recruiting international students) is twofold,” Haynes said. “One thing is that the more international students you get on campus, the greater the diversity is. The other side of that is if we can begin to offer degree programs in other countries, then that helps us increase the academic reputation of Northern in those countries.”

One of the most discussed topics in the forum, however, was the hiring of a marketing and advertising agency to assist in eliminating inconsistencies in Northern’s image and branding perception. The company, Genesis Marketing, has been working with NMU administrators for over a month, according to Communications and Marketing Director Cindy Paavola.

“One of (Genesis’) first tasks is to go through all of the research that was collected through the Stamats survey,” Paavola said.

Haynes’ focus, and the purpose of hiring Genesis Marketing, is to establish a more consistent identity for NMU through branding initiatives.

“My goal is to continue moving forward in the marketing and branding area and really make sure we’re focusing and getting the right material out and saying what we want to say about Northern,” Haynes said.

Haynes said Northern has historically used consultants for branding, as well as recruiting, and that companies like Genesis typically assist universities and companies on a short-term basis.

“They’re not permanent — they don’t stay forever — but we’ve used consultants (in the past) in not only branding but in recruiting,” he said. “It’s a way to keep costs down but bring expertise and talent in for short periods of time that you can’t hire internally.”

In regards to new parking closures due to the mobilization of the Jamrich Hall project, Paavola said work will begin on Monday, March 25 in fencing off a section of Lot 28, between the LRC and the Hedgcock building.

The closure will displace 120 faculty and staff parking spots, however handicap spots will not be affected, according to Paavola.

“Some of the handicap parking areas in Lot 28, will be preserved until the end of the semester,” Paavola said, adding that the university will also be creating additional handicap parking spots in other parking lots in the vicinity.

“Until the end of the semester, handicap parking spots will still exist in Lot 28, but obviously when it becomes a construction zone, there won’t be parking of any kind,” she said.