After three years of coaching the NMU men’s basketball team, head coach Doug Lewis will not be returning to the Wildcat court for future seasons. 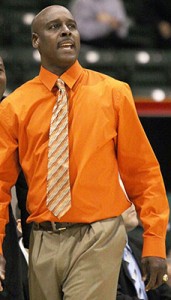 As of Wednesday, March 13, Lewis’s coaching contract will not be renewed next season, according to first-year NMU athletic director Forrest Karr. The decision for the contract’s end follows an overall 5-21 season for the Wildcats and a last place finish in the North Division of the GLIAC.

Karr said the decision is part of a department strategy that is aiming at heading its goals and teams into new lights.

“We have a department game plan that is the equivalent of a strategic plan for our department and it has a list of goals and measurable benchmarks,” Karr said. “Basically, at the end of the season, we sit down with the head coaches and go over where there program is. We then compare it to those goals and benchmarks and, in this case, we looked at it and felt that the program wasn’t where I believe it can be. So, I made the decision to go into a different direction.”

Karr said NMU offers many different advantages within its facilities for the team to utilize in order to help them perform.

“We have everything here that we need to be successful at this level,” Karr said. “At the Division II level, we need and have nice facilities. We need the full complement of scholarships that the NCAA allows, and we have 10. We have quality academic standards, so I believe we have a lot of built-in advantages that will help us to turn things around and get into a new direction.”

“It’s not just about wins and losses, and it gets difficult to quantify the exact number of wins we want to be at next year or two years from now,” Karr said. “Thinking of our goals and benchmarks, we will go through this rehiring process, try to identify and hire the best candidate and best coach for this program knowing what our goals are and, philosophically, we will try to hire somebody who’s goals are in line with mine and with what the department has set.”

At this time, Karr said the department does not have any replacement candidates ascertained for the position. Karr also said the university is currently beginning a national search to find a new coach to replace Lewis.

“Every university is different pertaining to this process,” Karr said. “I would like to have a search committee that has a number of people from the community that are people who understand basketball at the collegiate level and who have coached at a high level of high school or a comparable level. They know more about the X’s and O’s of the game than I do and I recognize that, so I want to surround myself with a search committee that has strengths that make up for what I do not know.”

Following the formation of a committee, Karr said the committee will go through the applications of coaches while looking for people who have coaching experience in NCAA Division I, II and III levels.

“The committee will look through all of the applications following a scoring process,” Karr said. “We will narrow it down and then conduct Skype interviews. We don’t know how many applicants we have, but we will look for natural breaks in scores to designate the number of interviews we do.”

From the team’s perspective, senior forward TJ Cameron said it is always tough during a coaching transition for any team or sport.

“A record is a record,” Cameron said. “Having a new coach coming in, it can be difficult for the guys. It also could be good for the guys who are still here. Hopefully, though, it all works out in the end.”