Two one-act plays will be featured as part of the winter Lab Show series from Wednesday, April 3 through Saturday, April 6 at the James A. Panowski Black Box Theatre. 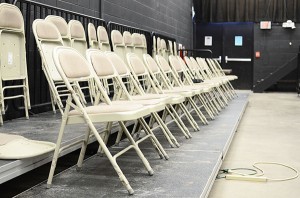 Huxtable is directing “How He Lied to Her Husband” written by George Bernard Shaw. According to the Forest Roberts Theatre website, the play features “British humor, satire and confusion abound in this fast-paced comedy that’s sure to leave you laughing.”

Huxtable said this is the first time he has directed anything of this size.

“There are three actors, myself and a costume designer,” Huxtable said. “One of the challenges is that the director is in charge of more things.”

Huxtable said although the cast has only been practicing for two weeks, it will be a quality production.

“Everybody brings something different to the table,” Huxtable said.

Senior theatre major Jacob Barbot, who is playing the role of “He,” said it is fun to be producing a comedy.

“It is a play of hilarity and fun, and the audience will love it,” Barbot said.

Junior theatre major Shane Vincent, who plays the role of “Her Husband” agreed. Vincent also said this is the group’s first time working with a dialect, which has been a challenge.

“It’s hilarious, funny and smart in that sense…it’s a perfect length for a one act,” Vincent said. “I’ll be using a Devon accent.”

According to Huxtable, “How He Lied to Her Husband” is about 20 to 25 minutes long.

Following “How He Lied to her Husband,” Wiles will direct “Sorry, Wrong Number,” written by Lucille Fletcher. The play was originally a radio program and is a murder mystery, according to Wiles.

“It’s different from what I usually direct,” Wiles said.

Wiles’ cast is slightly larger than Huxtable’s, but she said it is smaller than what the play called for.

“There are about six people cast in my show, and two of them have almost no theatre experience at all,” Wiles said. “This is the first one act play I’ve directed[…]the play is about 25 minutes long.”

Huxtable and Wiles have been in the same department since they were freshmen, according to Wiles.

“We came in at the same time,” Wiles said. “Pierce and I have gotten really close.”

Both Huxtable and Wiles said they would like to have a large audience.

Wiles agreed and said more students should come to the Lab Shows.

“I expect a large audience…I hope a lot of students will make up that audience,” Wiles said. “I strongly urge everyone to come to the Lab Shows, there will be a lot of laughs, a lot of hilarity and mystery.”

All shows begin at 7:30 p.m. in the Black Box theatre. Tickets are $1 for students and the general public and can be purchased at any NMU ticket outlet on campus.