The mobilization for a new, 136,000 square foot Jamrich building began on Monday, March 25, as contractors began fencing off the parking lot between the Learning Resource Center and Hedgcock in preparation of construction. 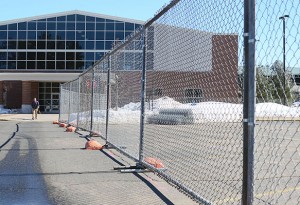 According to Associate Director of Engineering and Planning Jim Thams, the university will start excavation of the site by the week of Monday, April 1, and the project is expected to take around 15 months.

If everything goes as planned, the new Jamrich building will be open and ready for fall semester classes to begin in August 2014.

“This week (contractors) will begin to install construction fencing, deliver equipment and bring construction supplies on site in preparation of starting construction next week,” Thams said. “Typically we wouldn’t start a construction project of this size, especially in this location, before the summer break, but because of the size and complexity of this project it is essential to start construction now to complete the new building for the start of the fall 2014 semester.

“It’s 136,000 square feet and three stories out of the ground — it’s big, and even 15 months is an aggressive construction schedule.”

Thams said the cost of the building is $33.4 million, but the state is paying for $25 million of the total cost through the recent capital outlay bill. The capital outlay bill, passed by Gov. Rick Snyder in June 2012, allocated $300 million dollars to the pursuit of establishing better facilities on college campuses statewide. Northern was one of 18 universities to receive such funding for construction projects.

While the possibility of renovating the current Jamrich, which was built in 1969, it was found that rebuilding was the best option.

“One of the reasons we went with the new building was because of some of the inefficiencies or limitations with the existing (Jamrich) building,” he said. “Where do you go between classes in Jamrich? There are a whole bunch of people sitting on the floor or sitting on the limited benches that there are and the corridors are always jam packed. (The new Jamrich) will have classroom facilities, faculty and staff who will be teaching in the building are right there and you also have areas where students can go — there’s an informal learning component to this facility.”

Thams said the way in which the current building was constructed made it ultimately impossible for renovation to be more efficient than simply rebuilding from the ground up.

“When we started looking at the renovation for the existing Jamrich, that whole first floor is tiered and it all comes down to the same location in a bowl,” Thams said in reference to Jamrich rooms 102, 103 and 105. “All of those tiers are slab-on-grade concrete. What that means is if you were to bust out those floors to create a lower level, all of that dirt behind those tiers would have to be excavated out of there. There is no way to do that with the existing structure.”

However, unlike other recently constructed buildings on campus such as New Science and West Science, the new Jamrich will not have a lower level. Instead, it will have three floors above ground, and, unlike the current building, will contain both classrooms and faculty office space. In fact, four full departments will be moving into the new Jamrich upon it’s completion in fall 2014 — sociology, criminal justice, math and computer science, and English. The addition of the English department to the new Jamrich will also lead to the ultimate demolition of Gries Hall.

According to Thams, the new building will provide students not only with more appropriately-sized classrooms, but also with substantial lounge and “soft seating” areas — areas that lend to the aforementioned “informal learning component,” or places where students can converse and share ideas, of the building.

“The first floor is all classroom based with the addition of informal seating areas,” he said. “On the second floor, there are areas where we have soft seating, so we have some lounge furniture like what’s in the Starbucks lounge.”

Thams said among the projected classroom areas in the new building, there will be a 500-seat auditorium, two 40-seat case study classrooms, two 80-seat lecture halls and one 120-seat lecture hall, in addition to some smaller 30-seat classrooms. There will also be an open balcony on the second floor, as well as floor to ceiling windows on the exterior, which will provide the west-facing building substantial natural light in the afternoon.

In addition to the structural and site efficiencies of the new Jamrich, greater technological opportunities will also be available, according to NMU provost Paul Lang.

“(The current Jamrich) is very old and our structural and technological needs are different today than they were when the building was first built,” Lang said. “Active learning is very important today and there is a lot of technology that is built into classrooms today that wasn’t available many years ago. Most of the classrooms will be active learning classrooms so that the configuration will be very different from what you might be used to in the current Jamrich Hall. The tables will be more round or triangulated so the students can look at each other and work with each other in teams.”

Currently, NMU is mobilizing for bid package two, according to Thams, which will tackle the first phase of building construction and includes site work, footing, foundations and structural steel. Bid package three is

“The intent is to have both steel and block up — and the exterior of the building enclosed — by December (2013),” he said. “If we can do that, then we can work through the winter months on the inside of the building.”

NMU has contracted with Miron Construction, of Wausau, Wisc., and will be working with many local businesses in the construction of the new Jamrich. Among these local businesses are Champion Inc. out of Iron Mountain, which will be doing steel work, JP Electric of Marquette doing all site electric work and Associated Constructors of Marquette managing all excavation and site work.