To be a successful student-athlete, an individual must possess several intangible attributes: discipline, composure, determination, focus and the skill set in the respective sport are the building blocks of successful student athletes. 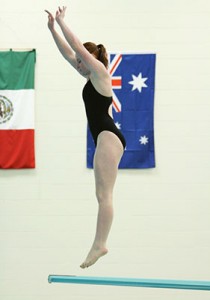 Junior diver Molly Kearney, who competes for the Northern Michigan University swimming and diving team, managed to maintain these intangible skills all throughout her high school and college career.

Kearney, who grew up in Sacramento, Cali. has been diving since she was nine years old. Kearney said she has tried her hand at several different things before diving finally stuck with her.

“Growing up, I did all sorts of different things,” Kearney said. “Aside from swimming, I did gymnastics, I was a cheerleader, a band geek, and I was also on the golf team. When I tried diving, it just stuck. When I told my mom I wanted to get into diving more, she searched around town for a club that suited me and that’s when it all got started for me.”

Kearney also participated on her high school’s diving team where she said she found a lot of success.

“During my high school career, I was named MVP every year,” Kearney said. “I also broke a record that was over 30-years-old and in my senior season of high school I went undefeated.”

With all of Kearney’s success in the pool, Kearney said she never lost sight on her goals and, when it came to what she wanted to do with her future. She is a biology major while also being a part of the pre-medicine program.

Kearney’s dream job is to be a doctor of osteopathic medicine. Kearney said picking NMU as her college was a fairly easy choice.

“Well, I knew I didn’t want to go to college with a bunch of people that I went to high school with,” Kearney said. “I looked at a couple of schools like Cornell, Colgate and Wyoming, but really, in the end, I kept looking at other schools and would always compare them to Northern, so I started to believe that this was the school I truly wanted to go to.”

Kearney said she built up a love for her new school, along with her new diving team. However, it wouldn’t be long before she would need the support from her team as she suffered a severe neck injury during training. The injury, Kearney said, almost forced her to give up diving.

“I made a mistake and came out of my dive earlier than I should have,” Kearney said. “When I was at the hospital, the doctor told me I had slipped a disc in my neck and it was completely out of place and tore several muscles in the process. I was also told I had to have surgery and that my diving career may be done.”

Kearney said while she understood she would need some serious time away from the pool, she would not let this injury stop her from getting back into her sport.

“When I heard the news I simply did not accept that,” Kearney said. “A major part of that is simply for the fact I couldn’t dive anymore, which has been a part of my life for so long, but that also meant I couldn’t do a lot of other things as well. I simply wouldn’t know what to do with myself.”

When Kearney returned to Northern after a month of being at home to rest and rehabilitate, the doctors told her she could take off the neck brace and return to training outside of the pool. Kearney said she was overwhelmed with joy and couldn’t wait to rejoin her squad.

“I was so happy to hear the news,” Kearney said. “It might have been the happiest I have ever been. I was so excited to get back into diving and rejoin the team. I mainly focused on conditioning and lifting weights. I wasn’t really allowed back in the pool for a while.”

Kearney’s comeback to the pool would take time, but she made a comeback by earning two All-American titles in during the NCAA swimming and diving championship in the three-meter and one-meter dive. Kearney said the challenges an individual faces a student athlete can result in some of the most rewarding experiences in life.

“If you make that choice to be a student-athlete, prepare yourself for the difficult lifestyle that comes with it,” Kearney said. “If you put your love into what you do, you should be be rewarded all the benefits that come with it.”