The NMU men’s golf team played their first match of the season this past weekend in Beavercreek, Ohio and Georgetown, Ky.

The Wildcats finished fifth in the first tournament of the spring season at the Beavercreek Golf club in Ohio on Friday, April 5. The Wildcats totaled 642 points while defeating Point Park University (619), Notre Dame College (625), Walsh University (633) and Cedarville University (641).

Head coach Dean Ellis said practices leading up to the match worked to the team’s advantage.

“We practiced hitting balls in the Dome during February and March,” Ellis said. “We felt good about our swing mechanics going into our tournament at Georgetown. The work paid off in many ways, however golf consists of much more than swing mechanics.”

Junior Jared Reid said they haven’t had much practice but they were able to beat half the teams and were able to work on building more confidence.

“Going in we haven’t had much practice because there’s so much snow outside,” Reid said. “We ended up tying for 21st out of 24 and we beat just about half the teams in the field. We’ll just keep  eliminating some of the mental errors, just keep getting comfortable, shaking off the rust, building some confidence on the courts and keep trying our best.”

The Wildcats tied for 21st at the Jewell on Sunday, April 7 at the Cherry Blossom Golf Club in Georgetown, Ky. Mantha led the ’Cats with a two-day total of six-over par 150, tying him for 24th overall. Murphy tied for 52nd and Sweeney tied for 99th. Reid and Johnson also golfed for the ’Cats.

The Wildcats play on Saturday, April 13 in the third series of NCAA Regionals at Purgatory in Noblesville, Ind. 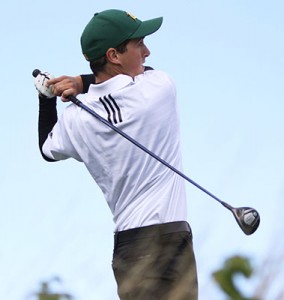 “Unfortunately, the Marquette weather won’t allow us to practice outdoors, so we will need to get the bulk of our practice done Friday and Saturday on the road prior to the regionals at Indianapolis on Sunday and Monday,” Ellis said. “Everyone’s short game should start to improve as the week continues and thus our scores should improve.”