Just days after elections instituted a new executive board for the ASNMU general assembly, new members are looking forward to developing the plans they have established during the final weeks of the semester and throughout the summer. 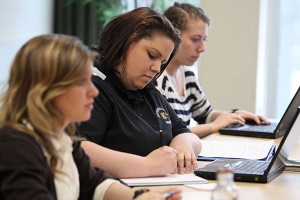 Newly elected ASNMU President Amber Lopota said she would like to see ASNMU more available and involved within the student body to get a better understanding of their needs.

“I would like ASNMU to become something dynamic and engaging, something students talk about and think about as a means of getting the change they want accomplished when it comes to their NMU experience,” Lopota said. “I want to open lines of communication by placing representatives in each hall government meeting, and by possibly putting together a recurring roundtable meeting modeled after the successful program that the Housing and Residence Life runs.”

The election also put new representatives into positions within the general assembly. ASNMU Vice President Abby Roche, who was also just elected, believes one of the priorities right now should be to create a “solid bond” between all representatives, new and old.

“(Lopota) and I are taking time to sit down with the new members to not only establish our visions for the upcoming semester but also dig out what they, as general assembly members, want to bring to the table,” Roche said. “One major message we are trying to instill within our board is the idea that they are representing their constituent and that every time they raise their placard to vote they are speaking on behalf of all the students within their constituency.”

According to Roche, each student representative speaks on behalf of 800 to 1,400 students.

“It is in our best interest to make sure all the new general assembly members are educated on meeting processes and all ASNMU procedures and the overall attitude that is envisioned for the rest of the semester,” Roche said.

Both Lopota and Roche will be using this summer to work on planning and organizing for the upcoming year.

During the meeting on Monday, April 8, two positions — chair of assembly and director of external affairs — were filled after the assembly voted.

Amer Mansoor, who was recently re-elected as an arts and sciences representative, was nominated and approved to the position as director of external affairs. This position will require him to prepare and direct necessary delegations to the statewide organization of student governments and coordinate lobbying trips to Lansing with the president of ASNMU on issues related to higher education.

“My main priority right now is to strengthen ASNMU’s connection with other student organizations,” Mansoor said. “I plan to meet with the leaders of campus organizations and ask what problems they are facing, and how we can help to the best of our ability.”

Mansoor believes Lopota and Roche will help guide ASNMU in a more positive direction and get back to focusing on their main priorities.

“I want to see ASNMU abandon the drama it has faced this past year, and return to its main roots: helping our student body,” Mansoor said. “This is going to be a great year for ASNMU because we have the right people doing the right jobs.”

Chair of Assembly Justin Bis said he will work on making sure the assembly stays strong, motivated and gets their work done.

“As chair of assembly, I have to be objective when it comes to debates during our meetings,” Bis said. “My goal outside of meetings is to make sure everyone is getting their jobs done properly.”

Bis is also eager to working with Lopota and Roche in the upcoming year.

“I know they are very motivated and will try to work hard to be a great representative for the student body,” Bis said.

Preparing for the 2013-14 academic year, Lopota highly encourages students who want to see the student government become a primary resource for students of NMU to apply for ASNMU.