Soccer hits the turf for spring: Winter weather does not slow down the varsity team

The winter snow overstayed its visit this year, cutting into what members of the women’s soccer team said was valuable spring tournament time.

Junior defensive player Kaylagh Hollen said the team showed true potential in the one spring tournament they were able to participate in. 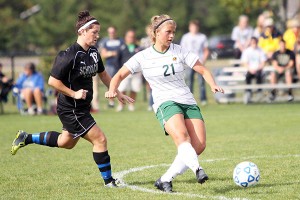 “Spring season has showed us which underclassmen have stepped up into those leadership roles that need to be filled,” Hollen said. “We also have a little more depth at the keeper and defensive spots. Our defense is what wins games.”

Due to weather cancellations, the ’Cats hosted the only spring tournament they competed in. The Superior Dome held several club and university teams on Saturday, April 6 and Sunday, April 7 to kick off the season for the Wildcats.

In the regular season of fall 2012, the Wildcats finished in the No. 12 spot of 14 GLIAC conference teams, earning a 3-10 record for the year.

“Last season I feel like we gave our best effort every single game,” Rietveld said. “We had many close games and possessed the ball really well. Our team also had good chemistry on and off the field which can also carry over to next year.”

Head coach Matt Granstrand has been coaching for 17 years, and the fall 2012 season was the first of which his team had not finished with a winning record.

Granstrand said the team’s challenges stemmed from a number of injuries the Wildcats had to experience during the season.

“We had six starters out the entire season,” Granstrand said. “We are a better team than how we ended record-wise. In the fall, now that we’re healthy, I think we’ll be back where we normally are.”

In early February, the women’s soccer team signed six incoming freshmen to play for the ’Cats.

Granstrand said the incoming players will be nice additions to the team.

Though the team will bring in several new players with little DII experience, the Wildcats have returning team members that had the opportunity last season to gain playing experience.

Coach Granstrand said the team improved in the face of adversity, giving the ’Cats a head start for the new season.

“On the positive side of all the injuries, all of our young players that would not have played were able to play a lot of games,” Granstrand said. “We treated it as a year to develop all of these players that would not have played and we’re ahead in that respect. Add the returning healthy players and incoming players, and I think we’ll have a really good chance at conference.”

The team has also been fundraising to earn money that will allow the ’Cats to compete overseas for the preseason at the end of the summer.

Granstrand said the Wildcats will have the opportunity to gain some early confidence with the trip.

Hollen said the team has the potential to go far, bringing back one of the most talented teams in the NMU soccer program.

“All we need is to have everyone on the same page,” Hollen said. “We all have to want to win. This is a great group of girls. After this past year we have been through a lot with each other. We deserve to have an amazing year.”

This fall, the Wildcats said they are looking to improve their record and to make a run for the conference title.

Looking at the upcoming season, Granstrand said Grand Valley will be the  biggest threat in conference play and will set the standard for the ’Cats.

“The biggest thing to work on is defense,” Granstrand said. “We want it to be that once we score, we know we’re going to win the game. Fans may not love that type, but at the end of the day solid defense can go really far.”

The Wildcats open regular season play against the NMU alumni team at noon on Saturday, Aug. 31 at home in Marquette.