In ASNMU’s final meeting of the semester on Monday, April 22, summer plans were the primary topic of the assembly, as they prepare as much as possible before the fall semester.

With a budget of $1,500 set aside to last them the entire summer, ASNMU is working on the preparations for Fall Fest as well as campus beautification projects. 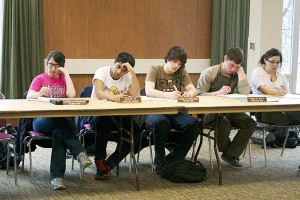 “For the new students coming in the fall, we would like to enhance the natural scenery such as the ‘Heart of Northern’ that we just saw disappear due to construction for the New Jamrich,” said ASNMU President Amber Lopota. “We have been informed the heart is getting a transplant, however, for anyone concerned.”

According to Lopota, many members of the executive board will also be staying in Marquette over the summer.

“We will be meeting with committees and administration to ensure that ASNMU hits the ground running when fall semester begins,” Lopota said. “We will also be immersed in the freshmen orientations as they come, transfer orientation, as well as working with housing and residence life when (resident adviser) training starts in August.”

“Our vision for this new vision of ASNMU is an organization that is accessible, visible and a dynamic,” Roche said. “The promotional materials we are looking at making will be geared at making ASNMU as understandable and comprehensive to the students as possible.”

Freshman orientation and Fall Fest are two occasions at which ASNMU hopes to debut the new ASNMU to students.

Additionally, with the lack of work that has been done in the past on ASNMU’s social media websites, they have appointed Director of Public Relations Analicia Honkanen, who has past experience with updating various social media accounts for organizations.

“Some things that I do plan on doing is getting our Facebook going,” Honkanen said. “The page has had minimal activity over the past years and that really needs to change. It is our responsibility to report to (students) of recent happenings of ASNMU, and it is also a great way to get student feedback.”

Honkanen also plans on redesigning ASNMU website to make it look more modern and efficient, as well as possibly adding a calendar of events so students can be more informed of campus events and ASNMU.

In addition to revamping their website and social media pages, Honkanen will also promote ASNMU in other ways using posters, flyers and social events.

YouTube and Radio X will also be contribute to the efforts in getting ASNMU’s name well-known across campus. Roche will be working closely with Honkanen in helping the organization move forward with a new image.

“We have a multitude of ideas flowing, but we are trying to stay focused on the idea of getting an organized and structured system down pat before the end of summer,” Roche said.

It was also decided during the general assembly meeting that ASNMU will be assisting in the extension of Starbucks hours during finals week, which will make it available 24 hours on Friday, April 26 through Friday, May 3.