ASNMU is creating and revamping some projects this summer for the upcoming fall semester. 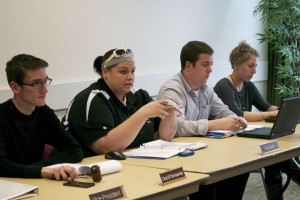 “We’re working with the grounds crew to find a designated flower bed,” Bradbury said. “You pick a spot and from there you do your own landscaping within that area.”

Bradbury said ASNMU is trying to spread its name across campus and demonstrate that it’s accomplishing things this summer.

Bradbury said other big projects ASNMU is working on are the upcoming student orientations and Fall Fest.

“Our biggest goal for the next year is ultimately our advertising,” Bradbury said. “Just getting our name out there and letting [students] know what we can do for them.”

Bradbury said ASNMU’s goal is to let students know what the organization is in place for.

“The biggest thing is to let them know we’re there so if an issue comes up, they can come to us and we can try to fight that issue for them,” Bradbury said. “[That] is ultimately the biggest reason we’re here.”

Another project the organization has been working on is the bike share program.

“I re-inventoried the bikes and got them all up-to-date,” Bradbury said. “We have about 20 of them ready to go in the fall.”

Bradbury said advertising is going to be key in informing students of the bike share program. Bradbury also said the project is the organization’s largest because it’s been ongoing for a year now.

He said students can check-out bikes from the library using their student ID. The student will have the bike free of charge for 72 hours, but if the bike is not returned within three days, there is a charge of $5 for each day the bike is kept.

Bradbury said students will be held accountable for any damages that happen to the bike.

“Any damages beyond normal wear and tear will be charged to their student account,” Bradbury said. “So instead of us having to bill them and then them throwing away the bill, they’d have to pay it before they can register [for classes] or graduate.”

The bikes were donated by NMU Public Safety, Bradbury said, so the quality isn’t top notch, but they are good to begin the program with.

Additionally, ASNMU president Amber Lopota recently attended a conference at the University of Maryland to improve her leadership skills to be applied to future ASNMU projects.

Lopota said she partially attributes her ASNMU election success to her speech for the March event, Elect Her.

Lopota said Judy Puncochar, an assistant professor in the School of Education, sent her a message shortly after the event asking Lopota if she would be interested in attending a conference focused on women in leadership roles, specifically on college campuses.

Lopota said she took a lot away from the various workshops.

“It was amazing,” Lopota said. “There were literally over 100 [workshops] to choose from.”

From learning salary negotiations to how to stop saying “sorry,” Lopota said there was a large focus on strengthening leadership and self-confidence.

“At the end of the workshop, they had keynote speakers who really emphasized that you really have to pick up your place in this world and chase your dreams,” Lopota said. “Once you’re able to do that, the number one priority should be to go out and help someone else do the same thing.”

Lopota said she realizes the word “leader” can carry a heavy meaning.

“Some people think it’s an overwhelming responsibility, which it is, but in a very positive way,” Lopota said.

“I would love to extend a hand, pull [people] in and help them get involved.”