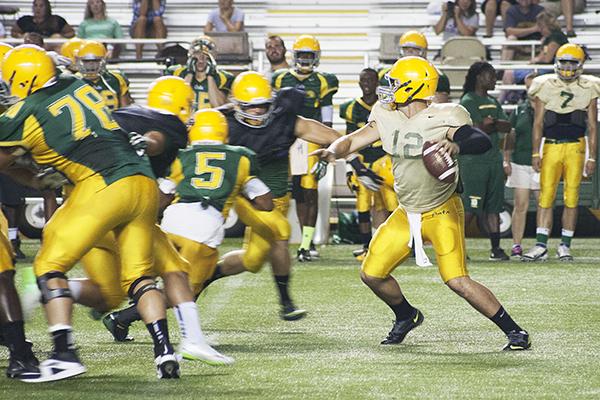 The Northern Michigan University Football team has been practicing daily in the superior dome, implementing team scrimmages and donning different colored jersey to keep track of who’s playing on what team.

Although the ’Cats have a new defensive coordinator this year the objective remains the same, don’t let the other team score.

New NMU football defensive coordinator, Coach Joe Ballard, will take over after coach Brian Newberry left to take a job as defensive coordinator with Kennesaw State.Ballard, who won two National Championships while playing safety at Grand Valley State, said he is excited to be coaching on the defensive side of the ball.“Working with the guys is awesome,” Ballard said. “I have a great staff with me.”

This will be Ballard’s ninth year as a football coach. Ballard said the main items he wants his players to focus on are to make plays and make sure they are running to the ball no matter where it is on the field.Although his focus is set on the defensive backs, Ballard is in charge of the overall concept of the defensive schemes.He said one of the most challenging aspects of working as defensive coordinator is trying to keep everyone on the same page.

“I want to make sure they understand what is going on,” Ballard said. “And that the players buy into the system.”Ballard won’t be changing much from last season’s concept, which helps a young defense. Senior defensive back Brandon Parson has been caught in the rollercoaster ride of coaching changes. Parson was third on the team in tackles and tied for first in interceptions, with three. Parson said the way Ballard has organized the plays makes it easier for the players to understand.

“He switched up the names to call and packaged them into categories that are related,” Parson said. “It helps us better understand the defense in a quicker fashion on the field.”Ballard said he is excited to see his players succeed and wants them to be successful at running.“I want to see them run, pursue the ball, and tackle,” Ballard said. “I would like to see them score touchdowns for themselves.”Since Ballard played college football, it can serve as a learning tool for the players.

“It’s easier to take advice from someone who has been there and done the things we want to do, like winning a National Championship,” Parson said. “He knows what it takes to win.”The ’Cats ended last season ranking 12th of 16 in total defense. They also finished last in the GLIAC in sacks, with only eight.

The ’Cats defense allowed opponents to convert on nearly 50 percent of third down conversions and more than 50 percent on fourth down.Ballard will continue to run a defense which includes four defensive lineman on the ball and three linebackers. He will also work to accomodate this scheme to confuse opposing offenses in hopes of creating turnovers.

“I would like to see a lot of turnovers,” Ballard said. “That will help us win football games.”

Ballard and his defense will make their debut in a couple of weeks.

The ’Cats open the season to  take on University of Findlay at 1 p.m. on Saturday, Sept. 14 at the Superior Dome.