Stephen Colbert, Tina Fey, Chris Farley, Ryan Stiles: what do all these people have in common?

Well, besides being prominent figures, they also are all former members of Second City, an improv comedy group based out of Chicago. 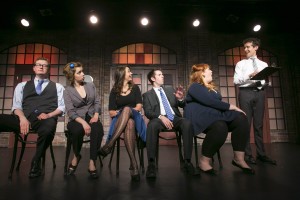 Second City tours the country, including a number a colleges, and they are making their way back to NMU next week.

Craighead said NAE not only had students in mind when deciding to bring Second City back but the community as well.

“The community loves them,” Craighead said. “This year we partnered with the theatre department. They’re using this as one of their shows that they’re putting on this year too so we were able to work together with them working out the costs and making it work for both of us.”

Director of theatre Ansley Valentine said he approached NAE regarding the collaboration because they simply wanted Second City here longer.

“Usually they would come for a day or two and we really thought it would be cool to have them here for a whole week,” Valentine said. “I think it’s going to be a real benefit to the community because it’s always been a very popular event when they have been here and often have to turn people away at the door because it was sold out.”

Valentine said another reason he approached NAE about collaborating on the event was due to the fact that the theatre wanted to have a production earlier in the year.

“If we were rehearsing a play, we couldn’t be performing the second week of class unless we started in the summer,” Truckey said. “So I approached [NAE] and they appeared to be amenable to the idea.”

“It helps us because [the theatre] has a big following with the community members and they’ve got followers who are there and who always get tickets every year,” Craighead said. “It’ll benefit them because we have really good promotion skills going on so we kind of help each other out.”

“One is going to be discussion; it’s called ‘IMPLOYED’ and it’s a workshop that shows how to use improv to land yourself a job—like resume building and interviews,” Craighead said. “The next one is going to be a discussion on the history of Second City and they’ll also pull people from the audience and make it fun. We’re looking forward to those.”

Craighead said feedback on Second City has been nothing but positive in the past.

“Students love them,” Craighead said. “I remember hearing people last time saying they were so funny. The second night last time sold out and people were really bummed they didn’t get to go. Some people tried to go two nights in a row because they liked it the first time.”

Craighead said while she hasn’t directly spoke to the community, she knows the community loves when Second City comes to the area and the community is a good reason as to why NAE keeps bringing them back.