The Forest Roberts Theatre (FRT) is gearing up for another year of laughter, music and dance both on the mainstage and in their studio series.

Director of Theatre and associate professor Ansley Valentine said the department tries to select a variety of plays when choosing shows for the season.

“We try to pick things that the students would find interesting or exciting,” Valentine said. “We try to price [shows] so they’re affordable as well.”

The mainstage season will kick-off Wednesday, Sept. 11 with “The Second City Goes To College/Happily Ever Laughter.”. Second City, an improv comedy troupe, has performed at NMU in the past. The FRT is working in collaboration with the student organization, Northern Arts and Entertainment, to bring Second City to the mainstage for four nights of performances.

The second of the mainstage performances was kept under-wraps for a majority of the summer until it was confirmed just weeks ago that “Les Miserables” will be coming to the FRT in November. Valentine, who will be directing the performance, said he thinks the performance will be a highlight for the program this year.

“This is the first time that the rights to the full production have become available and they’re only going to be available for a limited amount of time,” Valentine said. “We decided it would probably be best for us to seize the opportunity to do the show while we can.”

“Les Miserables” is the story of Jean Valjean, a man released from wrong imprisonment but discovers only mistrust and mistreatment. He breaks parole in hopes of beginning a fresh life but is pursued by Javert, the local police inspector.

“I’m excited to play [Jean Valjean],” Truckey said. “He’s an inspirational character in a way so I look forward to diving in and seeing what happens.”

The FRT will close out it’s mainstage season in April 2014 back on the FRT stage with “She Kills Monsters,” a play Valentine said is like a live-action Dungeons and Dragons type of performance.

“It’s a very interesting play,” Valentine said. “It’s going to have sword-fighting and a flying around sort of thing. I think people will like it alot.”

Shelley Russell will direct the play that tells the story of Agnes Evans who leaves her childhood home after her sister Tilly passes away. But when Agnes finds Tilly’s Dungeons and Dragons notebook, she forges on a journey to save Tilly’s soul.

This year’s studio series kicks-off in October with “A Kind of Alaska,” a story about a middle-aged woman who wakes to a changed mind, body and world. “A Kind of Alaska” will debut in the Black Box Theatre Friday, Oct. 18 and Saturday, Oct. 19.

The Haunted Theatre will make its return again in October as the FRT is transformed into a haunted house with something new waiting for you around every corner. “Haunted Theatre” takes over the FRT Thursday, Oct. 24-Saturday, Oct. 26.

The Black Box Theatre will play host to two performances in December. “The 12 Dates of Christmas” showcases a lady who must understand how to be single again during the holidays after being dumped by her fiance. The Christmas comedy will be performed Thursday, Dec. 5 and Friday, Dec. 6. 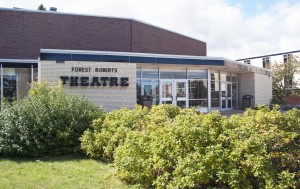 The second of two performances in December is “Santaland Diaries,” a comedy that follows a man’s experiences working as an elf in a department store. “Santaland Diaries” will take place Friday, Dec. 20 and Saturday, Dec. 21 in the Black Box Theatre.

The studio series’ final productions will feature dance performances with “An American in Paris,” a dance performance to the poem by George Gershwin, and the NMU Dance Concert which will be held Saturday, Dec. 7 and  Saturday, April 26, 2014 in the FRT.