Young members in the Marquette community are interacting with Wildcat athletes via the Young Wildcat Club.Offered by the NMU Athletic Department, the program aims to involve students within the area Associate Director of Finance and Business Operations, Robin Burke, said the community involvement is most important. 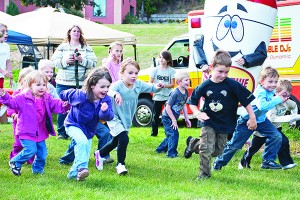 “The purpose (of the club) is to get community youth engaged with NMU athletics early on,” Burke said. “We get a lot of support and parents think it’s a great, affordable way to get involved.”

Burke said the club is for students who are in 8th grade or younger, and allows them to meet student athletes of NMU Student supervisor of promotions and marketing senior Sara Hujar said the members  have favorite players on the NMU teams.

“I think being that young, they start to develop a loyalty to the teams,” Hujar said. “You’ll see kids writing specific numbers on their crafts and they all get excited about autographs.”

During games, the promotions staff said they provide activities to keep members excited about events. Burke said home football games have activity stations for students, and the hockey team has an open skate with the members.

Hujar said the skating event is most popular, and gets children excited for club membership.

“The athletes are awesome,” Hujar said. “The skating event is the most interactive, and the players will help the kids skate.”

According to Hujar, there are also times when students are invited to athlete signings. The Wildcat team members interact with students and sign items.

Student supervisor of promotions and marketing, junior Rachel Eckert, said the program is beneficial to both the athletes and the Young Wildcat Club.

“I have always seen the athletes treat the kids well,” Eckert said. “It’s so exciting for them, and the athletes are paying attention to them. That has to be a confidence booster for the athletes, too, and it’s a moment that everyone can get to enjoy.”

The Young Wildcat Club has a $20 yearly membership fee per student which includes a T-shirt and membership card.

Additionally, they are granted access into any NMU sporting event, aside from hockey, of which students are granted admittance to 10 chosen games. They are also offered special invitation to club events that take place.

Burke said these special invitations include activities that occur throughout the year, in addition to the sporting events.

“We will get a group of club members together to do a homecoming tailgate,” Burke said. “[Members] are invited to athlete signings, and at the exhibition game in hockey we invite club members to skate with the hockey team.”

The age difference could impact the success of the program, as Eckert said it is popular with the younger students.

“I think the kids really do enjoy it because the younger kids can’t sit still,” Eckert said. “It still keeps them involved with coloring pictures of the Wildcat and becoming familiar with the mascot. They get involved and start to learn players names, and it’s beneficial in that aspect.”

However, Hujar said she still sees older students getting excited about the program, and said one specific time she saw an older group of boys that stopped at an activity table after one of their friends encouraged them.

“There are always some kids that are ‘too old’ or ‘too cool’ (for the club),” Hujar said. “But they do get involved.”

Overall, the reaction from the sports promotions office was a very positive one in regards to the benefits the Young Wildcat Club offers to both NMU athletics as well as the community.

Eckert said it brings something new to the table for Northern Michigan University that may not be offered at other universities.

“I think its a great thing the kids get to do,” Eckert said. “I’m not sure of other universities, but it helps make Northern a little more unique in that aspect.”