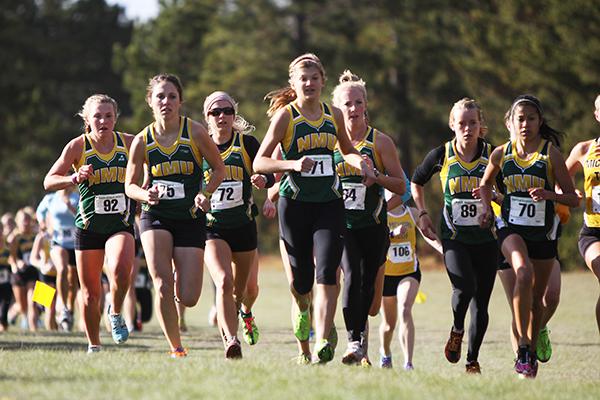 The Wildcat cross country team will be opening their season this Saturday, Sept. 14.The women’s cross country team will compete at the Midwest Collegiate Opener in Kenosha, Wis. The upcoming meet will be the first of seven meets for Northern Michigan University in the 2013 season. According to head coach Jenny Ryan, the ’Cats believe they can compete for one of the top spots, although they will be missing a large part of their squad to start the season.

Many runners won’t be attending the meet due to other athletic obligations, and another who is out due to illness.

“We have one athlete who won’t be joining us because of sickness,” Ryan said. “A group of our athletes are also on the ski team, and train for both during the cross country season. They’ll be training and performing pre-season time trials this weekend.”

Despite this, Ryan said she is confident the group of Wildcats heading to Wisconsin this weekend will be able to perform among the best.

“We definitely won’t have our team at full strength this weekend, but at the same time we have a lot of depth,” Ryan said. “I know with the group we have traveling to Kenosha we can finish near the top or even win the meet.”

This confidence is consistent with Ryan’s outlook on the season, despite losing several key players that competed on last year’s team.

Last season, the women’s cross country team finished fourth in the conference and eighth in the Midwest Collegiate region with the help of several experienced runners that will not return to compete for Northern Michigan University.

“We lost Rita Woidas, Mallory Celaya and Katie Granquist, who were all good runners from last year’s team,” said Ryan. “But we’ve trained really hard this past summer and added two very fast runners in Christina Toogood and Xavier Donajkowski. We should be very competitive this season.”

Toogood joined the team from Stavenger, Norway this season as a junior.

Donajkowski, from Alpena, Mich., joined the team after she had not run  her freshman year.

This early meet will give the team a look at the University of Wisconsin-Parkside’s cross country trail.

The trail at UW-Parkside is one the Wildcats will see two more times this year, including for the Lucian Rosa invitational and the NCAA Midwest regional meet.

“That is a really big reason why we go to this race,” said Ryan. “It lets the girls get to know the course well before regionals.”

Senior runner Mandy Dye said this race is very important in preparing the team for the rest of the season.

Dye also said she was very excited to be able to use her experience to head into her final season running for the Wildcats, and she has high goals for the team this season.

“Our goal is nationals this year and we’re going to have to compete with the best on this course to get there,” Dye said. “I’m really excited to get the season started and hopefully start it out strong.”

Dye also said how important this race was in preparing the team for their pre-GLIAC meet in Houghton, Mich.

The pre-GLIAC meet is the first of two that the Cats’ will be attending at Michigan Tech.

“Being able to run a race before heading to Houghton is great for us,” Dye said. “It’s great to be able to get back into things and see competition and a track that can prepare us for the one at Tech.”

The first meet of the season will begin at 1 p.m. Saturday, Sept. 14 for the female teams.

It will be the last trip to Wisconsin for the Wildcats until 10 a.m. Saturday, Oct. 12 when they travel back to Kenosha for the Lucian Rosa Invitational meet.