Do you know who Crius is? What about Argus Panoptes?

If you don’t know who they are now, you might by the end of next week. The 78th annual Homecoming kicks off next week and this year’s theme? Ancient Myths and Timeless Tales. Jordan Paquet, special events coordinator and junior public relations major, said the theme is open to anyone’s interpretation of what mythology is. 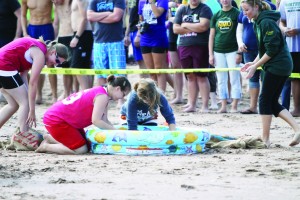 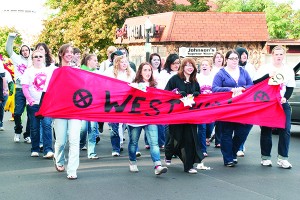 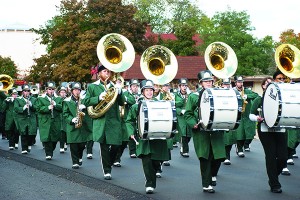 “Any sort of myths, they’re good to go,” Paquet said. “It’s not designated into just Greek mythology. It’s going to be involving the Greek, the Norse, down to old ancient Chinese. It’s whatever anybody wants to do involving mythology.”Paquet said some even consider Voodoo a part of mythology. But regardless of the theme, Paquet said Homecoming week itself will be the same when it comes to the events except for the addition of two new events this year.

“One is just for the offices on campus, like academic offices,” Paquet said. “It’s going to be an office decorating competition to see which office can do most Northern spirited or they can do mythology themed.”Paquet said resident adviser and resident director offices do not count but any building office located in Cohodas, the University Center or in Gries would count.

Paquet said the second new event is for students is something they may be already familiar with.

“The new event we’re going to do is called ‘Change That Makes Cents,’” Paquet said. “It’s going to be a penny way for whichever groups decide to participate in it.”

For those unfamiliar with a penny war, simply put, the goal is to have as many pennies in your jar as possible. Any silver or bills put in the jar negate the pennies. For example, if there are two-hundred pennies in a jar and someone puts two dollars in, your score remains zero.

Paquet said the new event will benefit the Marquette community.

“Each group that participates is going to pick a local charity that they want the money donated to,” Paquet said. “At the end of the week, whoever wins the penny war, all of the money will be pooled together and go to that [charity].”

Paquet said there will be jars that travel to each of the week’s events if students want to put coins in there.

Paquet said this year, the Homecoming Spirit Police are making a return but in different fashion.

“The Spirit Police is entirely different this year,” Paquet said. “We have decided to move [Spirit Police] entirely to an online platform in which we’re going to be utilizing our Facebook page so whether it be through posts  we have on there or a contest we run, it’s all going to be done entirely online.

Paquet said the change will allow the Special Events Committee (SEC) to reach more students and it will allow students to see how Spirit Police actually runs.

“It was very ‘in the dark’ in previous years,” Paquet said. “Nobody knew where they were, nobody knew who they were but this will be like an actual contest done online where [students] can see who won each thing and can kind of better visualize what is happening the entire time.”

SEC adviser, Lizzie Corser, who also used to be special events coordinator, said the use of social media in Homecoming has come about in only recent years.

“I started [as special events coordinator] in the fall of 2008 and we definitely communicated a lot through email,” Corser said. “That’s not the way most of us see social media but we were using mass communication through mass emails but now we’re really changing forms this year. Social media has become a really substantial part of the way that we run our Homecoming campaign.”

Corser said the SEC utilized a Facebook group page to communicate before events to ensure everyone is on the same page and knows what is going on.

Corser also said the SEC has a public Facebook page (www.facebook.com/nmuspecialevents) where people can stay informed on Homecoming events and any changes that may occur.

Corser said Homecoming will kick-off Sunday, Sept. 15 with the Dead River Games where participants will go through an obstacle course, an ice cream drop and a sandcastle competition.

This year’s comedian who will be emceeing the King and Queen competition, Paquet said, will be Matt Kirshen.

“He is from London so he has a British accent,” Paquet said. “He’s done some things with Comedy Central and he was on Last Comic Standing a few years ago. He’s really funny.”

Wednesday showcases the coordination of groups in the stepping competition and after a day’s break, hundreds of students will walk down the streets of Marquette in the Homecoming Parade on Friday, Sept. 20.

After a long awaited week, Saturday brings Game Day which both Corser and Paquet said students, NMU staff and faculty, community members and the like can expect the second annual NMU Game Day to be larger than last year.

NMU Game Day is a big block party, Paquet said, where a huge section of Third Street is completely blocked off just for everyone to come and get hyped up before the Homecoming football game.

Corser said Double Trouble DJs will be performing this year, as will the winners of the stepping competition. New this year to Game Day, Corser said, will be pony rides sponsored by the Marquette County Convention and Visitors Bureau.

Paquet said attendees can also expect twice as many food vendors this year, there will be a beer tent, inflatable bounce houses and slides, oversized ladder golf and chess and even a fire truck.

Paquet said students should take advantage of all the events Homecoming week has to offer.

“It isn’t every week at Northern, throughout all your classes and everything that you do, that there’s a new event that’s happening every night,” Paquet said. “Sure, there’s certain times where a programming group might bring one act one Friday night, but this is a full week of Northern-spirited events put on just for students.”

Anyone interested in joining SEC may email Jordan Paquet at [email protected] and more information regarding events and the full week’s schedule can be found at www.nmu.edu/homecoming.