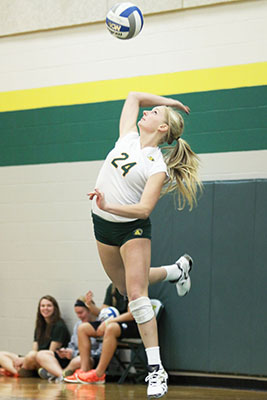 Homecoming weekend began for the ’Cats with their first match against a GLIAC team. Each of the three sets won by the ’Cats were within three points.In their first game of the weekend, the Wildcats competed against Saginaw Valley at 7 p.m. Friday, Sept. 20 at the Vandament Arena.

The Saginaw Valley Cardinals were able to fight their way back in the first set after being down 11-6 to the Wildcats. Once the cardinals tied the score up at 17, the ’Cats battled Saginaw Vally to win set number one, 27-25.Freshman libero Megan Dahl said the team knew this game was not going to be an easy one. Dahl has scored five points this season and has 15 digs. She also had one service ace in the match against the Cardinals.

Dahl said the Wildcats watched video before the weekend games in order to prepare for the Cardinals.“We knew, going into the game, we would have to put up a fight,” Dahl said. “It wasn’t going to be a walk in the park.”In the next two sets against NMU, the Cardinals were not able to gain an advantage over the ’Cats.

In the final set, the Wildcats were tied at 22 with the Cardinals and the game continued to go back and forth before sophomore libero Alex Berger served an ace to win the game 27-25, which also resulted in a match victory for NMU.

Berger said with it being Homecoming week, the Wildcats had extra motivation to make a statement in the first two games of conference play. “We were excited for our first conference game of the season,” Berger said. “We showed it on the court with our passion and energy.”The Wildcats then took the court against Lake Superior State University at 1 p.m. Saturday, Sept. 21 at the Vandament Arena. The ’Cats had less trouble in this match as they took three sets almost immediately (25-10, 25-20, 25-15).

Berger continued to tally plays for the ’Cats as she had four service aces in the three sets against the Lakers. Berger finished the game with a total of three spikes and four digs.Dahl said the Wildcats understand how important it is to never underestimate an opponent and to always put for the effort

“No matter who we are playing, we have to play our level of game,” Dahl said. “We always need to have that will to fight and compete against any competition.”After the two victories this weekend the Wildcats are 8-3 overall. In conference play, the ’Cats are 2-0.

After a successful start to conference play, Berger said the team will look to build upon their momentum going into the rest of their season in order to continue to improve.“We saw what plays worked for us,” Berger said. “We saw what aspects of the game we still need to improve on this week in practice before our next match.”

Berger said she was excited the team was able to win the Superior Oasis Tournament.Berger also said she is proud of how far the team has progressed since the preseason. The Wildcats will be home again next weekend when they take on a pair of GLIAC opponents.

Their first game will be at 7 p.m. Friday, Sept. 27 against Lake Erie College. Lake Erie will be looking for their first win of the season as they have yet to win a game with an overall record of 0-6. The ’Cats next opponent will be Ashland University (7-3) at 4 p.m. Saturday, Sept. 28 in the Vandament Arena.