The women’s cross-country team, recently ranked No. 20 in the nation, competed at their home course on Friday, Oct. 18 to earn a perfect team score of 15. The team ran against Michigan Tech, Lake Superior State University and Gogebic Community.

The ’Cats placed first out of three teams; Michigan Tech placed second and LSSU placed third. Though Gogebic Community participated, they did not have a team to place. 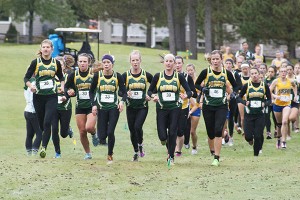 Head coach Jenny Ryan said the team was happy to finish in first.

“They ran incredibly well,” Ryan said. “It was nice to come out on top.”

Donajkowski said she was eager to run with her teammates again after missing the past few meets due to a tendonitis injury.

“Coming off of an injury, I was really happy with my results. My goal was to be in the top eight and I did just that,” said Donajkowski. “The team expected to do well; it was nice to see that all of our hard work paid off.”

“It is great to see how close everyone becomes throughout the season,” Ryan said. “Being able to connect with teammates and friends, and sharing a love for something is an amazing thing. We have been able to create the strong running environment that we’ve been working so hard for.”

Next week, the team will continue to run daily and train for the meet that will be held this Saturday, Oct. 26 where the ’Cats will travel to Michigan Tech for the GLIAC Championship.

“I believe that next week’s meet will go really well,” said Donajkowski. “The team has run this course before and though it has some tough hills, Coach Ryan has trained us well along with other teammates. As long as we run together and communicate, we will do great.”

Last year,  the GLIAC Championship was held in Linwood, Mich., where the team finished fourth out of 16 teams with a score of 139 points. Grand Valley State University won the conference with a total of 25 points.