The men’s hockey team will gear up for Michigan Tech this  weekend after a split series with the University of Nebraska-Omaha Friday, Oct. 18 and Saturday, Oct. 19.NMU lost to Omaha the opening night of the series 2-1 when the ’Cats were unable to reciprocate a goal scored by the Mavericks in the third period. Head coach Walt Kyle said the Wildcats performed much better on Saturday night when they fought back for a 6-3 victory. 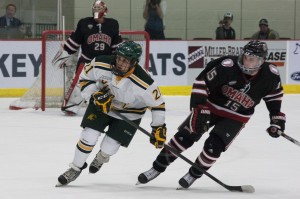 “From our first game (of the season) to our fourth game, we improved every night,” Kyle said. “That’s a trait that I hope continues, and we keep getting better and better as the season goes, game to game, and weekend to weekend.”

Redshirt freshman goaltender Mathias Dahlstrom took the loss for the ’Cats with 29 saves on 31 shots on goal.

Ludwig said the team has gotten better and improved with each game, last weekend included.

The battle continued on Saturday night when the Wildcats came back at the Mavericks for a 6-3 win.

Senior forward Jake Johnson started the string of goals for the Wildcats in the first period.

Omaha responded and tied the game at one in the final minutes leading up to the first intermission.

The Mavericks spent a majority of the second period in the penalty box, racking up 32 penalty minutes on 12 infractions over the course of the game, which led to four NMU power-play goals.

The Wildcats finished the game on a goal from senior forward Erik Higby to seal the victory.

Junior defenseman Mitch Jones, who had two assists on Saturday, said the team has had two pretty good weekends to start the year.

“We’re getting better every game,” Jones said. “The goals ended up going in for us last weekend, which was a nice reward.”

This weekend, the first rivalry series between the ’Cats and the Huskies opens at 7:07 p.m. Friday, Oct. 25 at the Berry Events Center where NMU takes the home court in the league play opener.

Kyle said it will be a great rivalry game against a team that is expected to be physical after beating the ’Cats 8-2 at Tech last season.

“They beat us real handily up there, and it’s one of those deals you don’t easily forget,” Kyle said. “They are a hard team to play against and we understand that, and we’ll be prepared physically.”

The Huskies are 0-3-1 overall on the 2013 season after losing a series to Notre Dame last weekend.

Jones said the game will be a big rivalry, but if the ’Cats play their game, they should be alright.

“We love playing them,” Jones said. “I’m sure they get pretty fired up to play against us and hopefully it’ll be a big crowd.”

Ludwig said in order for the Wildcats to be successful, the team needs to stick to the game plan and continue to make plays.

“They’re a good team, so we have to keep it simple,” Ludwig said. “We need to play the way we can play, and we kind of owe them one, so hopefully we can go out there and get the job done.”

The Wildcats enter the weekend with a 1-3 overall record, where two of the losses were taken by the University of Wisconsin-Madison on the road a couple weekends ago.

Kyle said the team played sharper and moved the puck with a little more intelligence against the Mavericks than they did in Wisconsin.

“We didn’t have as many turnovers,” Kyle said. “Our system play was much sounder this weekend than it was a week ago, and we’d expect that with more time to implement it.”

This weekend, the ’Cats have home advantage on opening night of the series against the Huskies.

On Saturday, the ’Cats will travel to Houghton to face the Huskies in the John MacInnes Student Ice Arena.

Ludwig said the home crowd is always an advantage for the team, but in rivalry games the atmosphere is great in both locations.

“Either atmosphere is a great place to play,” Ludwig said. “They have a lot of fans that come here, and either way the atmosphere is good for us.”