Audience etiquette generally dictates that yelling at a movie screen or a live performance will either get you kicked out or at least shushed into silence. But this month at the Vista Theater, rude obscenities, innuendoes and partial nudity are just par for the course for audience and cast alike. 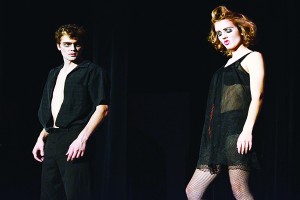 “The Rocky Horror Show,” Richard O’Brien’s infamous rock opera parody, has become a cult classic and a tradition that shattered all kinds of rules and stigmas.

Whether you’re a seasoned fan or a Rocky “virgin” (jargon for a first-time attendee), the live performance in Negaunee’s historic theater will have you laughing, dancing the “Time Warp” in the aisle and yelling at actors, not to mention dodging toast, rice and hot dogs. If you’re into that sort of thing.

“I also like hearing some of the new callback lines the crowd yells that I haven’t heard before,” Kulju said. “The hardest thing is to keep in character and not laugh.”

Co-directors Martha Webster, on the Peninsula Arts Appreciation Council (PAAC) and Eliisa Gladwell, a freshman pre-pharmacy major at NMU, both said they’ve never directed before, but that some of the cast has been in the show for years.

“I’ve been in theater since the age of six, but this is my first time directing a show,” Gladwell said. “I love it. We’re part of a big family here.”

This marks the Vista’s 13th reincarnation of the show, Gladwell said, which this year is set in the ’50s. 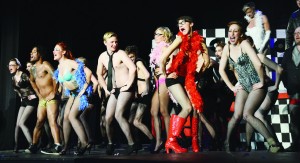 “I’m loving the way it’s coming across,” Webster said. “A lot of the music lends itself really well to the ’50s theme. It allows for a little more sassy, sexy, campy humor, which it already had a lot of.”

“Rocky Horror” is a humorous tribute to the science fiction and B-horror films of the decades preceding it, according to the official fan page. It tells the story of the newly-engaged Brad and Janet who, due to car trouble, find themselves locked in a castle with a mad transvestite scientist and his slaves.

Originally produced in London in 1973, the musical played on Broadway in 1975 for a famously brief initial run despite a Tony nomination, according to the fan website.

The musical and its film adaptation (the 1975 “Rocky Horror Picture Show” starring Tim Curry and Susan Sarandon) now has a worldwide following. The musical was ranked eighth in a BBC Radio 2 listener poll of the “Nation’s Number One Essential Musicals,” according to the BBC.

Webster said the audience participation gives people an opportunity to be part of the show, especially at the midnight showings, the first of which was on Saturday, Oct. 19 and the last will be Saturday, Oct. 26.

“The midnight showing is usually a rowdier crowd,” she said. “That’s when the more veteran, passionate audience shows up. The show is like a religion to some people, and those [people] are the midnight crowd. It’s definitely a more intense experience.” 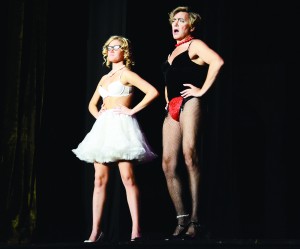 Gladwell and Webster both encouraged people to dress up for the show’s costume contest, which means dressing up like one of the characters, dressing in drag or just dressing in precious little.

“There are some people who wear basically nothing and some who dress conservatively, so pick your poison,” Gladwell said.

when you come in costume,” Webster said.

Scantily clad audience members will be far from alone, since the cast spends most of the show in their skivvies.

Kaitlin Aisthorpe, starting as a linguistics major at NMU next year, played Columbia and was Janet last year. She said she didn’t mind being nearly naked on stage.

“It’s actually a really big confidence booster,” Aisthorpe said. “People would think it’s like ‘Oh my god!,’ but we have naked—well not naked—semi-naked rehearsals. So we get really used to it and comfortable with it, and as long as we’re comfortable, then the audience is comfortable.”

After the last midnight show, Matt Gilbertson, a math and music major who played Riff-Raff and is hoping to graduate this year, said his friends encouraged him to do the show.

“I’d never done it before,” Gilbertson said. “[I] watched the movie a couple times and it was pretty cool, so I was like ‘let’s do it,’ and I did.”

Megan Klebba, a sophomore pre-vet major who played Riff-Raff’s sister Magenta was standing beside him. She said she started going to the show in high school.

“I know something else you and your sister always do,” Matt said. Klebba laughed loudly over the din of the packed lobby.

“He likes to be creepy and stay in character way past time,” she said.

The last midnight show is on Saturday, October 26 and tickets are $15.

The production is sponsored by the Peninsula Arts Appreciation Council (PAAC), which has been promoting arts in the Marquette County area since 1973, according the show’s program.

The Vista Theater also has a thrift store (note to costume-shoppers) that opened next to the theater in 2008 to help support its productions.

Auditions for their upcoming musical “Scrooge” will be held from 7 to 9 p.m. on Sunday, Oct. 27 and Monday, Oct. 28 at the Vista Theatre.

All are welcome to audition, according to the program.

Visit www.vistatheater.org for more details as well as what props NOT to bring, for safety reasons.