The Northern Michigan University men’s hockey team started off conference play last weekend against rivals Michigan Tech University, splitting the weekend in their first WCHA conference series of the season.The Wildcats took on the Huskies in a home-and-home series, dropping the puck on Friday, Oct. 25 at the Berry Events Center in Marquette and returning to play again on Saturday, Oct. 26 at the John MacInnes Student Ice Arena in Houghton. 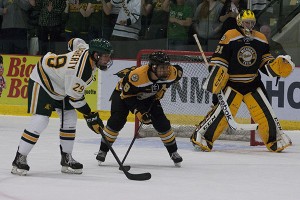 The ’Cats opened the series in front of a sold-out crowd in Marquette, delivering a 2-0 victory to an audience of over 4,000 people. NMU then headed to Houghton to play the Huskies on their home ice, losing 4-1.NMU head coach Walt Kyle said the performance of the ’Cats on Friday showcased good quality action coming from defensive and replacement players.

Assisting Vigier’s fourth goal of the season were junior forward Reed Seckel and senior forward Erik Higby.Vigier said opening the weekend series with Tech with a victory and with good plays showed signs of strengthening chemistry.

“Starting the weekend off with a ‘W’ is a really big deal,” Vigier said. “It feels good to have a good start but we need to keep going. I need to give a lot of credit to my linemates. I don’t even know who made the toss to me, [Reed] Seckel or [Erik] Higby, but it was a great play for sure. We are getting great chemistry now and we need to keep it going.”

od, freshman defenseman Brock Maschmeyer earned his second goal of the season and closed out the game’s scoring, bringing the game to 2-0. Maschmeyer’s shot was assisted by Higby and junior defenseman Luke Eibler.

Starting with the team as a defenseman and moving up to forward, Maschmeyer said his fellow Wildcats have been assisting with the change of position.“The boys have been helping me out a lot,” Maschmeyer said. “It just made the transfer that much easier. It’s not too bad. It’s just getting to know the systems again and getting to know where you got to be on the ice for your position.”

Both teams accrued numerous penalties during the game, with Michigan Tech tallying 42 minutes in the box off of 10 penalties and NMU tallying 16 minutes off of eight.

Redshirt freshman goaltender Mathias Dahlstrom earned his first shutout game during his first Wildcat career victory, saving 24 shots. Copley saved 30 shots for the Michigan Tech Huskies. The Wildcats held a shots-on-goal advantage of 33-24.On Saturday, the Huskies responded from their loss from night before with a goal in the first period from sophomore forward Blake Pietila at 6:33.

One minute later, Pietila contributed another goal at 7:34 against Dahlstrom, bringing the game to 2-0. Leading up into the game, Kyle said the upcoming schedule for the team made acquiring wins a necessity on the homefront.

“We needed to get a win because, counting Houghton, we have five straight in a row,” Kyle said. “That’s five straight games against good teams in good buildings and tough travel to Alaska with tough travel back. We needed a win.”In the second period, MTU freshman forward Alex Petan shot past Dahlstrom to bring the score to 3-0 after 39 seconds in the frame.

The Wildcats responded 38 seconds later with Vigier getting the puck around Copley, putting NMU on the board at 3-1. Vigier’s goal went unassisted.

The Huskies concluded the game’s scoring at 7:37 into the second to end the game at 4-1.Goalie saves for the second game included Dahlstrom with 29 saves while Copley tallied 14. Overall standings following last weekend’s series against the Huskies leave the ’Cats with a WCHA record of 1-1-0 and an overall record of 1-1-4.

NMU will be gearing up for their first conference series on the road this weekend when the ’Cats take on the Alaskan Nanooks in Fairbanks, Ala.The puck is slated to drop at 11:07 p.m. EST Friday, Nov. 1 and Saturday, Nov. 2. Fans can catch the action on 100.3 The Point.