Between 2007 and 2011, more than 5,000 Marquette residents lived below the poverty level, according to the United States Census Bureau. 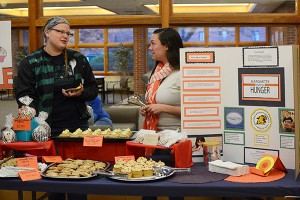 Marquette Ending Hunger was founded this spring but the organization had its first meeting back in September, Larsen said. The goal of the group is to raise awareness regarding poverty, hunger and homelessness in Marquette.

“A lot of times, rural hunger and poverty gets overlooked,” Larsen said. “But our goal is to be raising awareness right now and to begin raising funds to make a positive change in the community, and to do something about the situation of hunger in Marquette.”

But Larsen said the end result they’re hoping to achieve is much bigger than that. She said the ultimate goal is to establish a local food bank.

Despite already having food pantries in the area, Larsen said a food bank differs in that it distributes to smaller food pantries such as the Salvation Army.

“I would like to have a centrally located, fully-operational and self-sustainable food bank that would distribute to those places as well as individual families,” Larsen said. “It’s definitely going to take a lot of determination but our group has a lot of passion and it’s been really inspirational so far this year to see how much has been done.”

The year started off with a first meeting attendance of just over 50 people, Larsen said. The following meeting had a large attendance as well and, according to Larsen, the meetings consistently attract around 20 people each week.

Larsen is thankful to have members that are so dedicated to the group, she said.

At the last meeting, there was a large group discussion on why hunger is an issue and what it means to be hungry, Larsen said. The group also discussed how people take food for granted.

“At the university, we swipe into the MP or Den countless times a day and you thoughtlessly grab a slice of pizza, a plate of pasta,” Larsen said. “Half the food that you take at the MP you waste. I’ve seen it so many times. I’ve done it and I feel guilty about it, but we take food for granted.”

She said that helped spark the idea of a 30-hour famine, a day of fasting to raise awareness about how we take food for granted.

Senior criminal justice major Brent Larsen, member of Marquette Ending Hunger, has been fully supportive of his sister’s idea since she first told him.

Brent said he and Lauren had a class together where they had to come up with a problem, find a way to resolve it and propose a plan for how they were going to fix the problem. Brent said while many, including himself, were just trying to meet the basic requirements of the assignment, Lauren took it and ran with it.

Brent said he and Lauren met with United Way last week, and while they’re not able to provide the group any support, they were helpful in saying who could.

United Way is unable to help the group at this time because Marquette Ending Hunger is not a non-profit organization, Brent said, but he and Lauren hope that changes soon.

“Lauren and I are kind of looking at working through all the bylines to see if we can get us to be a nonprofit,” Brent said. “So next semester we’re going to work through all the logistics and then during the summer, Lauren is going to focus on trying to get that through with the government.”

Adviser of the group, Cassie Kobler, said she knew this group would be successful because of Lauren’s passion and how much work she had already put into research. Lauren said the amount of support has been overwhelming.

“I spoke in front of class and as I was walking out, this guy stopped me,” Larsen said. “He reached into his wallet, gave me $5 and said, ‘I wish I had more money.’ It’s little things like that that bring me back and realize why we’re doing this, and we’re doing this to feed hungry people and to help Marquette.”

The group hosted a bake sale on Wednesday, Nov. 6 and will be hosting it again from 4 to 8 p.m. Thursday, Nov. 7 in the Payne/Halverson lobby.

In the end, as long as some impact is made in the community, Larsen said she would be pleased with the results.

“Even if from the time I started to the time I finish it, 10 more people know that hunger is a serious issue and it’s on their radar, I’ll feel successful,” she said. “I’ve already seen beautiful things happen with it and I’m very happy with where things are going.”