At first glance, the menu for NMU Dining’s next major themed event might look typical enough. Among the dishes offered are burgers, chili and a carved roast. But take a closer look, and things might start to look a bit stranger.

The burgers? They’re not made with ground beef, but with elk. The chili’s secret ingredient is venison. And the roasted meat on offer isn’t ham or turkey: it’s antelope. 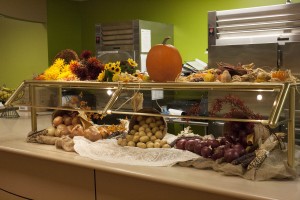 This might not be the Wildcat Den’s everyday fare, but it’s a perfect fit for the Hunters’ Feast. An NMU tradition for more than six years, this year’s Hunters’ Feast will take place at lunch on Thursday, Nov. 14 in the Den. And this year, it’s been given both a new twist and a stronger commitment to theming than ever before.

Like all NMU Dining events, a unique and carefully-designed menu is central to the Hunters’ Feast. Certified Executive Chef Nathan Mileski said game meats have always been an important part of the event. But this year’s menu features a much wider variety of foods than previous years, many of which were inspired by another theme event entirely.

“We did the Bizarre Foods dinner in the Den in the beginning of the semester with foods like ostrich burgers and kangaroo sausage, and people really embraced it,” Mileski said. “So, we kept that in mind for the Hunters’ Feast. You’re going to see things like boar, and antelope and pheasant.”

The afternoon’s theme won’t just stop with the menu, either. In fact, Marketing Manager Stephanie Raboin said the entire Wildcat Den will be redecorated for the event.

Raboin said NMU Dining has decided to submit the Hunters’ Feast to the Loyal E. Horton Dining Awards, a competition run by the National Association of College and University Food Services (NACUFS). Entries in the residential dining “special event” category are judged in four areas: the menu, marketing, theming and other considerations. As a result, the NMU Dining team has worked on all of these areas to make the Hunters’ Feast the biggest dining event of the fall semester. It’s also one of the biggest events ever held in the Wildcat Den.

“We’ve entered events to NACUFS in the past, and we’ve placed very well. But these have always been in the Marketplace, so we wanted to do something in the Wildcat Den for once,” Mileski said.

According to Raboin, this year’s Hunters’ Feast represents a chance for students to enjoy dishes that aren’t usually served at the Wildcat Den.

“Whether you’d like an opportunity to try some unusual foods, or just a fun lunch event that’s something different from the norm, come celebrate the start of hunting season with us at the Den before you head to camp,” Raboin said.