Do you hear the people sing?

The story of young love, sacrifice, redemption and second chances comes to the Forest Roberts Theatre with the production of “Les Misérables,” Wednesday, Nov. 13 through Saturday, Nov. 16. Due to high demand, two additional performances have been added, Friday Nov. 22 and Saturday, Nov. 23. 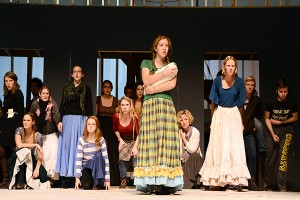 “I think the key theme is redemption,” said Ansley Valentine, professor and director of Forest Roberts Theatre. “It’s the story of Jean Valjean’s journey, which I think is really the heart of it.”

“Les Misérables” is set in 19th century France, where Jean Valjean has been released from a 19- year prison sentence for stealing a loaf of bread. He violates his parole in an attempt to start a new life, free from mistreatment and mistrust. Valjean is pursued by Javert, a police inspector, who dismisses the idea that Valjean can change his ways.

Stage manager Kristy Priest, a senior theater design and technology major, is managing the show as part of her senior project.

“Valjean was given a second chance,” Priest said. “The audience has the opportunity to see what he is going to do with that second chance. That’s where the story actually starts.”

The 38 different cast members vary in age and experience. There are college and high school students, young children and community members.

“It’s so fun to watch all these people grow with their characters,” said Priest. “They are fantastic. The talent we have in this cast is amazing.”

NMU’s very own Broadway star, Paul Truckey, associate professor and NMU alumnus, will star as Jean Valjean. Truckey has previously appeared in “Les Mis” as various roles, including Javert, both on Broadway and in national touring companies since 1995.

“At the university level, having a professional really brings the actors’ ability to a higher level,” Priest said.

“Originally Les Misérables was not on the theater schedule for this year,” she said. “The reason why it was added is because it is a huge hit across the country and the show is bound to sell out.

“Also, having the professionalism of a Broadway star really puts the show up to an entirely different level,” Priest said.

Valentine said this production will inspire many different reactions from the audience.

There are stories interlaced with the main story of Valjean’s, which will appeal to all kinds of audience members, Valentine said.

“The musical itself attracts attention right from the start and it keeps you on the edge of your seat,” said Priest. “I honestly believe this is the show of the decade at the Forest Roberts Theatre.”

The show starts at 7:30 p.m. Wednesday through Saturday and there is a 1 p.m. showing on Saturday, Nov. 16. Tickets for students are $5 with a student ID and are $15 for the general public. Tickets can be purchased online or at the NMU bookstore. For more information email [email protected] or call (906) 227-1032.