This weekend will be the first time the men’s hockey team has had a break from play since the season started in early October.

The men have this weekend off before they open a series of four league games in two weekends at home. The series opens at 7:07 p.m., Friday, Nov. 22 against the University of Alabama-Huntsville in the Berry Events Center. 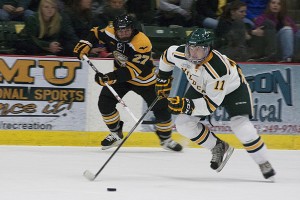 Head coach Walt Kyle said he wants to use the weekend off to make sure the team recuperates and stays healthy.

“Right now, I do want to give our guys a couple days,” Kyle said. “We’ve got some guys that are dinged up. We want them to recover from injuries and there’s some fatigue creeping in. It’s just one of those weeks we’re going to back off of them a little bit and then jump back into it next week.”

The Wildcats are coming off two weekends of back-to-back travel. The ’Cats were in Alaska the first weekend of November, followed by a trip to Kalamazoo, Mich. last weekend to face Western Michigan University of the National Collegiate Hockey Conference.

NMU finished with a 5-4 victory over the Broncos Saturday night, followed by a split game, 2-2, Sunday evening.

After the weekend, Vigier leads the WCHA in goals and points scored with 10 goals and two assists. He is also tied for 18th across the nation in the men’s scoring leaders in Division I hockey.

Vigier said the team has been playing well together, which contributes to his success on the ice.

“Our lines with Daugherty and Seckel have got pretty good chemistry right now and we’re playing good as a unit, so obviously that helps,” Vigier said. “Seckel had two goals this weekend, so we’re doing what we’re supposed to do. Hopefully we can keep it going. We’re looked upon as leaders to help the team win games so we’ve got to score to win. That’s what we’ve been doing to help.”

Junior forwards Ryan Daugherty and Reed Seckel had four points between the two of them against the Broncos. Daugherty had two assists and Seckel put in two goals for the ’Cats.

Kyle said there were quite a few players who showed up this weekend with really good play across the board.

“I think I’d be remiss if I didn’t say Vigier,” Kyle said. “I think he had a real, real good weekend for us. I think both [senior defenseman CJ] Ludwig and [senior defenseman Wade] Epp were exceptional; I would say those two guys were exceptional at defense. I think [junior forward] Ryan Daugherty started to emerge; he didn’t score a lot but he was certainly a real, real noticeable impact guy, and then [senior forward Erik] Higby, as well. Higby wound up getting two goals on Saturday night; those were big goals for us.”

The ’Cats’ next opponent, Alabama-Huntsville, is sitting at the bottom of conference rankings with an 0-6-0 overall record.

Kyle said the games against Alabama are going to be important for the Wildcats to prepare and work on some bigger aspects of their game.

“We need to do a little bit better job killing penalties,” Kyle said. “We’re kind of in and out with that. I think that’s an area we can improve on. We probably take too many penalties and although we’re much better than we were a year ago, there is still more room for that.”

Following Alabama-Huntsville, the ’Cats will host Ferris State University, the top team in the WCHA after last weekend.

“There’s a lot of good chemistry between the guys, whether it’s seniors or freshmen, and they’re doing really well,” Epp said. “We still need to focus on what we need to get better on and moving forward to finish off the first half of the year.”