Before attending NMU, I did my initial college schooling at a sizeable college in my hometown of Jackson, Mich., cleverly named “Jackson Community College.” Fresh out of high school and eager to establish myself academically, I enrolled in a 14-credit semester, composed strictly of prerequisites for a yet-to-be-determined major focus. I took psychology 101 my first semester, interested to see if psychology was a field for me.

The first project of this class was a presentation analyzing a sub-field of psychology, preferably one of interest to the student. I chose evolutionary psychology, intrigued by the implications that modern biological research had for the discipline. My thinking was that, after all, humans and animals aren’t so dissimilar. We eat, drink, communicate, copulate, procreate, etc. There are other primate species known to get drunk off of old, fermented fruit. These connections fascinated me (and still do).

My assumption was this: in the world of academics, personal biases stay in the school parking lot. (Again, I was a freshman.) I presented my project, confident that the theory of evolution would hold in a psychology 101 classroom, at a secular institution, no less. What later came out was that my professor was not only Christian, but believed in a six-day creation story that (in her mind) happened 10,000 years ago. On top of that, she travels with a roving band of ministers every summer, preaching the “good word” for all who may hear (her academic letters provides me hope that she has more tact than the campus preachers NMU was subject to earlier this semester).

I received an “E” on the assignment. And I met all of the requirements.

She was incapable of leaving her faith in the car, despite the fact that she chose a textbook with a substantial chapter on the topic which I was promoting. 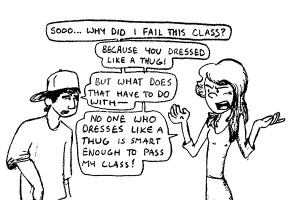 Ideological bias in the front of the classroom is so common that it seems almost negligible to discuss. Professorship allows exploitation of power in instances where objectivity is vital. Positions of authority provide those who hold them with an inflated sense of confidence in their own opinions. This can apply as much to police officers as it does to professors. (One would think a psychology professor would be keen to notice the phenomenon. Apparently not.)

When an individual is given reign over a group, according themselves unfair advantage is almost second nature. In my professor’s case, her faith trumped reason. The sanctity of science took a back seat to the sacredness of her faith.

Would God damn her to hell for passing a student who met all of her requirements yet happened to discuss a tenet of science that does not necessitate the existence of that God? I don’t know. I don’t believe in God. But if that was her thinking (and I think it’s somewhat accurate), then she is not fit for educating.

But her case is one. Professor biases standing in the way of student grades are incredibly common.

I had an English professor at the same college who identified as a socialist (we got along). He assigned an essay where students were meant to discuss several peer-reviewed academic papers in their respective field of study.

My peer in the class, Alexa, was a marketing major who wrote a superbly formatted, well-researched, and excellently analyzed essay regarding children’s marketing. She received a ‘C’ on the essay, despite her hard work.

While the professor did not say that Alexa’s paltry grade was due to him finding the phenomenon of children’s advertising perverse (and he did specify his opinion multiple times), it was at least clear that she deserved a better grade.

Temporarily forfeiting your own predispositions, unless they are pertinent to the class itself, is what keeps education sacred. This does not mean removing the flair of opinion, but not letting that opinion seep into the grading process. Effort speaks for itself, despite the content.