Wildcats to face No. 18 Lewis

The women’s basketball team will take on the No. 18 ranked Lewis University Flyers at 1 p.m. Sunday, Nov. 24, coming off their 102-40 victory over Finlandia University on Saturday, Nov. 16. 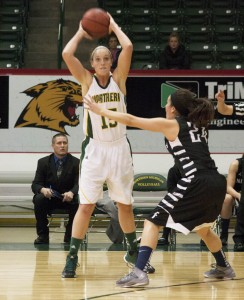 NMU jumped out to a 6-0 lead early in the game and took a 48-16 lead into the half against Finlandia. The ’Cats played a full-court press until the end, where they outscored Finlandia, 55-47, in the second half. The win improved the ’Cats’ record to 2-0.

Junior forward Brooke Coenen, who led the game with seven rebounds, said she liked the way the team performed although they left room for improvement.

“I thought overall we did pretty well,” Coenen said. “We didn’t rebound as well as we wanted to, but we all got touches on the ball and we made great passes.”

Coenen also finished with 11 points for the Wildcats.

Mattson said Coenen is a player the team will look to rely on.

“Brooke’s been playing well,” Mattson said. “She played well at the end of last year and she’s starting to come into her own. I expect her to be one of our go-to players against tough teams.”

“If we want to be any good, we need to execute on both ends of the court,” Mattson said. “We need to step on the court and give ourselves the best chance to win.”

The Flyers are coming off a 73-68 victory on Sunday, Nov. 17 over Upper Iowa University. Redshirt sophomore guard Jamie Johnson led Lewis with 16 points for the win.

Coenen said she looks forward to the challenge of their opponent.

“We know it’s a great opportunity with one of the top ranked teams in the country,” Coenen said. “They should be a tough battle, but we can play with them.”

“We’ve struggled with consistency,” Mattson said. “This team has progressed to the point where I like it, and we’ve got a chance to do some good things.”