The 2014 Downtown Showdown Ski and Snowboard Rail Jam is expected to bring in more than double the participants of last year’s inaugural event.

The Marquette Downtown Development Authority events and promotions coordinator Samantha Collins said with spectators and competitors, the event should reach more than 500 people at any given time.

This year, competitors will be skiing and boarding for cash prizes reaching up to $1,500.

Skier Hunter White, a fourth-year human centered design major, competed in the Downtown Showdown last year. White said he plans to return for the 2014 event with a couple of friends.

“Everyone should come out and watch,” White said. “It’s a really fun event that most people don’t get to see.”

White said the event is about having fun and having a good time with friends, whether you win the prize money or not.

Snow will be brought in to cover the 100-block of East Washington Street for the rail jam.

The rail jam and U.P. 200 sled-dog race events are coordinated to take place on the same weekend.

Collins said it gives spectators something to do the entire weekend, and lets people spend time downtown as they wait for the U.P. 200 mushers to return. 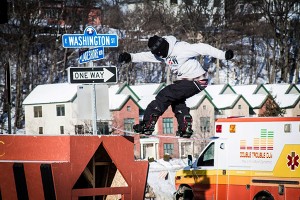 “Last year, for the first ever Downtown Showdown Rail Jam, we had great attendance,” Collins said. “We had a lot of people participate in the competition phase as well as the open jam portion of the event, and so based on last year, if the weather gets at least up into the double digits for the weekend, I think we can expect to exceed the amount of people coming out to watch the event and participate as well.”

The 2013 rail jam offered cash prizes, live music, beverages, food trucks and even a replica of the ore docks for one of the competition rails.

White, who first started skiing at age three, said the 2013 inaugural Downtown Showdown event was a lot of fun.

“Last year I competed in the open jam and I also competed in the ski rail jam,” White said. “They had a lot of great features. They had a big saw feature and the ore dock feature, as well, so it was really cool.”Double Trouble DJs will return to emcee the event. Cash prizes will be offered again and Dia de los Tacos will be at the event.

There will also be a warming tent for spectators and competitors to get some food and find a spot to take a break from the cold.

Collins said the neat thing about the rail jam is how unique an event it is for the area.“We take the excitement of the ski hill and we bring it to downtown, and that’s really unique,” Collins said. “We are right off Lower Harbor, right off the shore of Lake Superior, and it’s the view and everything. It really makes for quite an awesome event.”

This year, the event opens at 3 p.m. Saturday, Feb. 15, and will run through the evening.

Thursday, Feb. 13 is the last day to register for $35. After, the registration increases to $45. The open event is a separate event and costs $10 per person.Collins said registration is open to all ages.

“There is no age range and that’s another unique thing about this event,” Collins said. “We have kids as young as seven or eight years old competing against college-range kids. If somebody thinks that they’re good enough to compete, they can register and do so if they’re interested.”

This year, the event will be sponsored by Range Bank, Ore Dock Brewing Company and Monster Energy.White said this is an event for both spectators and competitors.

“Now we have this one event where everyone can come together,” White said. “It’s taking all of the best people that do the rails and putting them in a small, condensed area and having them compete against each other while you can sit inside, get a drink next door, or have some tacos and hang out by the water.”