Snow Removal: Take a seat next to the men behind it all

Harvey Scherer, retired from the Coast Guard since 1992, has been plowing since 2005 and celebrated his 42nd wedding anniversary last week. “People ask me ‘how can you be married for 42 years?’” he said. “Well, if I knew the secret, I would be on the beach right now.

He worked in the Marquette Area Public Schools for 10 years as a bus driver, custodian and maintenance person and came to NMU in 2004 as a bus driver for sports teams.

“I do this for the students,” he said. “They keep me young. A lot of people today say our world’s in trouble with our youth. Some people say kids today are really lazy and don’t care. I just say, come do my job for a while, and you find a whole different group of kids.” 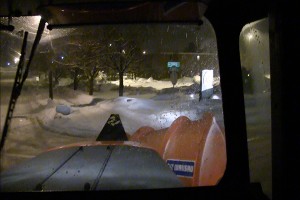 HEO Brian Schmeltzer, a Marquette native, said the job isn’t as straightforward as it may seem. “You might think all we do is drive all day, but when I get home, I’m beat,” he said. “Lots of traffic, lots of pedestrians, lots going on.”

Scherer and Schmeltzer both said people should be more aware of plow trucks by, for instance, listening to the back-up alarm when walking and using a turn signal when driving.

“I’m carrying almost a ton of sand, and if somebody pulls out in front of me, it takes me almost triple the distance to stop,” Scherer said. “So we have to be aware of everybody and everything around us at all times.

Scherer said the job is mentally-draining because of the monotonous hours of focused concentration, trying not to hit curbs, cars and pedestrians.

“Everybody’s in a big hurry these days, and they’re not paying attention, he said. “The students that are walking are usually pretty good because they realize they’d lose in a contact battle with me. But it’s the people in cars that are in a big hurry; they need to learn to take their time. We will be out of their way eventually.”

Drivers work five to seven days a week starting at 5 a.m. or earlier depending on snowfall. There are seven full-time heavy equipment operators. “Our longest day was 16 hours,” Scherer said. “We had eight hours off, and then back on it for another 16. We did that for several days several years ago. After a while, you think you don’t have any other life but snow.”

Scherer said the season does start to wear on him. “At the beginning of the year I enjoy this, but now we’re getting to the time in the year when we’re starting to hate it, because it’s the same thing over and over,” he said. “That’s what we have to be careful of — the monotony, because we do the same thing day in, day out.”  

Schmeltzer drives the biggest plow truck, which they refer to as the “Oshkosh.” Featuring all-wheel drive and all-wheel steer, they have two Oshkoshes — one hauls sand and the other, salt.

“Depending on road conditions, I’ll start spinning like anyone else,” he said. “Sometimes it’s worse because I’m empty in the back, just a little   sand. If I’m loaded it’s a heck of a lot better, but with all the weight on the front and the back end empty, the rear end can start sliding.”

He said there are many things to watch out for.

“You don’t have to be going very fast to jar yourself, that’s for sure,” Schmeltzer said. “All the islands in all the parking lots, you can’t see half of them. You’ve got to feel your way in there.”

Grounds Supervisor Terry Eilders confirmed the potential danger of running into unseen obstacles, like manhole covers. “I had one man hit a manhole cover; knocked himself out and ended up with stitches,” he said. “Another fellow hit a manhole cover, fell out and broke three ribs.”

Eilders said snow removal is a big expense for the university with the cost of salt, sand, maintenance, fuel and labor. “We just spent $7,000 for wear edges — all the big plows have an edge on them that gets routinely replaced,” Eilders said. “Salt costs have been going higher and higher, that’s about $30,000. Sand is $2,000 to $3,000, and that’s just designated specifically for snow removal. Fuel costs; we’ve got six units out right now. They’ll go through 50 gallons each on an average eight- hour shift.”

Eilders said snow removal is a big expense for the university with the cost of salt, sand, maintenance, fuel and labor. “The colder it is, the harder the ice is, and it’s harder to make the sand stick,” he said. “It blows off.”

Eilders said because it has been such an abnormally cold winter, they’ve gone through al- most double the usual amount of sand, which is used for temperatures below 20 degrees.

The sand gets mixed with calcium chloride to keep it from freezing and clumping, which also helps to melt snow.

He said they never use salt on the sidewalks because it is hard on plant material and deteriorates concrete.

And the reason they don’t put salt down during heavy snowfall is because of the unique way it mixes with the snow. “When the snow’s coming and coming, and we put salt down, it makes this slime that’s not quite snow and not quite ice,” Eilders said. “We call it snot, and it’s more slippery than ice or snow.”

Scherer said the equipment requires regular maintenance, which is provided by two full-time mechanics who stay busy, with 10 vehicles dedicated just to snow removal. “The equipment takes a beating, people don’t realize,” Scherer said. “We try to maintain everything — they do a great job, actually. Our mechanics, they’re some of the best mechanics I’ve ever seen.”

Despite the challenges, Schmeltzer said plowing is the best job he’s ever had. “I love it,” he said. “It can be harried sometimes, but it’s nice knowing that you’re getting everything cleaned up and you can see what you’ve done, just getting people where they need to go.”

Scherer said he likes being able to see the students and know he is helping them complete their education.

“They take the time to smile and wave,” he said. “Sometimes you’ll hear a ‘thank you.’ That’s probably the best part of the job. Doesn’t sound like much, but a little thanks now and again goes a long way.”