Marquette theater to be renovated

After nearly 20 months of darkness, a downtown landmark is being restored, transforming the soon-to-be 100-year-old Delft Theater into a state-of-the-art 250-seat restaurant and dinner theater. With four floors, rooftop seating, casual dining and a full bar featuring Michigan craft beers, the development includes a full restoration of the building’s historic structure and iconic marquee.

“The Delft certainly is a central landmark building in our downtown. The community has a great interest in seeing that building, that façade restored,” said Executive Director of the Marquette Downtown Development Authority (DDA) Mona Lang.

The Delft LLC., a development partnership between local business owner Thomas Vear and NMU alumnus Robert Martin, purchased the struggling movie theater from Carmike Cinemas Inc. in 2012 and officially closed its doors to the public two days afterwards. For the first time in 98 years, downtown Marquette was without a theater.

Movement is currently in progress to restore the building’s prominence on Washington Street. While Vear or Martin were unavailable to comment on the development process, Mike Potts, owner of Tamarack Custom Builders and the contractor working alongside Vear and Martin, said he’s sure the finished product will be quality.

“[Vear] has a lot of confidence in what we’re doing,” said Potts. “It’s going to be fabulous, a really nice thing for downtown.”

Potts has taken on some of Marquette’s large restoration projects. Garden Bouquet and Design on West Baraga Avenue, the home of Lakeshore Bike on North Lakeshore Boulevard. and Downtown Eye Care. He also restored the Donckers building when Vear bought the property in 2007. 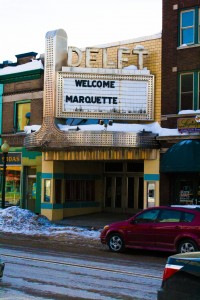 Potts acknowledged the size of the Delft renovations, noting  there is a lot of stuff going into a small space. This will be one of his largest projects to date, he said.

“At this point [in the development] we’re still working on structural stuff,” said Potts.

Since 1914, the Delft theater has been remodeled and redecorated multiple times, most drastically in the 1930s and the 1980s, each time with little regard for preservation.

“The way it was built, it was actually pretty cool,” said Potts. “There are some really incredible murals in there. But in the ‘30s they just bashed them up terribly.”

Structurally, the theater wasn’t built too well from the inside either, noted Potts. Plans include rebuilding much of the interior design to meet modern building code. However, very little of what would usually be considered trash will actually leave the site.

“We’re going to try to use the structure materials we take out for a lot of the non-structural elements,” said Potts.

Potts plans to build dining tables and waiting benches from old ceiling timbers. Removed steel is being repurposed into chairs, tables and for the bar.

“We’re not shipping stuff in, we’re not throwing stuff away,” said Potts.

The building, as planned by Potts and the developers, will feature energy-efficient everything.

“There’s no point in doing anything in this modern world that’s not energy efficient. It’s just smart,” said Potts.

Everything from the rooftop, insulation and operation equipment will be energy efficient. The marquee will be switching over to LED bulbs, which can offer up to 90 percent energy savings and can last 25 times longer than incandescent bulbs.  Potts pointed out that a major benefit of reusing a lot of materials is that the carbon footprint is already present. The reduced stress on the environment is worth the extra time and labor associated with detailed refurbishing, he said.

On Monday, Feb. 10, 2014, the Marquette City Commission gave the go-ahead to apply for a Community Development Block Grant through the Michigan Economic Development Corporation (MEDC) and the Michigan Strategic Fund (MSF).

“This is only the first step,” said Lang, who submitted the grant application on behalf of the city. “If they’re (MEDC) interested in the project, they will send us a letter of interest. At that point, we will file a full grant application.”

If successful, the grant would supplement $481,000 (about 30 percent) of the restoration project’s estimated $1.6 million cost. Lang said the addition of grant funds would allow the project to increase in scope. One of the DDA’s major objectives is to make the downtown district as attractive and as environmentally pleasing as possible for Marquette’s citizens, businesses and visitors.

“Honestly, I would like for people to come in and think [the Delft] looks normal,” said Potts. “I would like people to walk in and just accept it for what it is and just say ‘that’s a gorgeous building.’”