Up next: GLIAC Track Championships

The Northern Michigan University track and field team will be heading into the GLIAC Outdoor Championship to finish out their season as a team.The Wildcats will be competing against 14 GLIAC teams in this year’s upcoming GLIAC outdoor Championships. 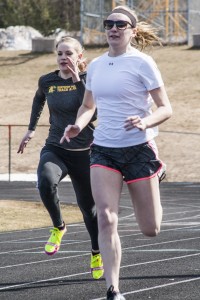 The meet with feature conference opponents, including Grand Valley State University. GVSU is currently the No. 1-ranked team in the country, according to the U.S. Track & Field and Cross Country Coaches Association.

Junior Brittni Wirtz said the whole GLIAC conference is strong this season.“GVSU and Tiffin are always good competition,” Wirtz said. “We have been preparing for this meet all season and it’s when we will peak and hopefully have our best performances.”

The ’Cats have finished in the top tier of teams when competing at meets against other GLIAC teams, like the Hillsdale Invitational on Saturday, April 12.

The Wildcats finished third at the meet behind second-place GVSU. Host Hillsdale University took home first place. The ’Cats finished ahead of GLIAC opponents Wayne State, Lake Erie and Ferris State at the Invitational.The Wildcats, in the past at the GLIAC Outdoor Championship, have finished fifth in 2011 and fourth in 2012.

The Wildcats finished 12th last season during the Outdoor GLIAC Championship. Earlier this season at the GLIAC Indoor Championship, senior Cheyenne Stewart broke the GLIAC triple jump record. The Wildcats were able to have other athletes finish in the top three of their respective events, setting personal records and breaking school records.

Juniors Ebony Young and Christina Toogood earned GLIAC honors at the event. Young said she was happy when she got GLIAC honors.

“I was happy that I was able to score points for my team in conference,” Young said. “Also that I got the chance to compete.”Young will not be able to compete in the GLIAC Outdoor Championship due to an injury.Young said injuries aren’t fun and she’s ready to get better.

“I guess the season went okay,” Young said. “I didn’t get to compete at all outdoor, so it ended pretty disappointing.”The ’Cats will wrap up their second season under head coach Chereé Hicks.

Wirtz said the Wildcats will be looking to improve on their GLIAC Indoor Championship performance. “The goal is for us to do our best and get performance records,” Wirtz said. “Everyone has been improving even with the extremely windy meets we’ve been having.”

The ’Cats’ top finishes in scored team meets this year were two third-place finishes at the Hillsdale Invitational and the Karl Schlender Invitational.The Wildcats will finish the season at the GLIAC Outdoor Championship in Geneva, Ohio at Lake Erie College.

Junior Emily Allen said there will be one team they need to keep in their sights at the GLIACs.“GVSU always,” Allen said. “Their team is huge compared to ours.”

Allen said some team goals are to be supportive of everyone and to place as high as possible. The meet will start on Wednesday, April 30 and finish on Friday, May 2.