A lively crowd of more than 100 students converged on the Academic Mall Wednesday, Aug. 27, to confront a campus preacher accosting students about their religious beliefs—even going so far as to call female students whores. 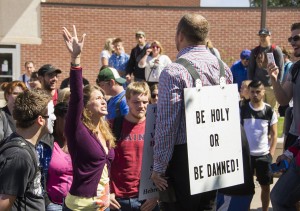 Students sang “Yes, Jesus Loves Me” and debated with the man, Chris LePelley, who frequently shouted “You’re all going to hell!”  LePelley, a traveling preacher with Open Air Holiness Ministries, attracted even more curious students on Wednesday, his second day on campus.

LePelley, a Texas native who travels the country preaching to college campuses, said he is a Bible-believing Christian, and not affiliated with a denomination.

LePelley said the reaction from the students was more intense on Wednesday than this first day, Tuesday, Aug. 26.

“Folks got real mad at the preaching,” LePelley said. “I was renouncing things that the Bible renounces; fornacation, pornography, immodesty, blasphemy. Folks don’t like that.”

Ginny Ponkey, a junior undeclared major, stomped away from the crowd after hearing LePelley.

“I really don’t take a side here,” she said. “I do respect what this man is trying to do. He’s trying to promote good. But he’s doing it in a completely terrible way. This man is judging people that are coming up to him and asking questions.”

After speaking with LePelley, Ponkey also said she was called a whore and she witnessed several females being called whores because of their clothing.

LePelley said he never called someone a whore for their choice of clothing. He said he does tell women they are immodest when they are wearing revealing outfits.

“I’ve told many girls today that I did not specifically call them a whore,” he said. “Unless of course they openly admitted to being involved in pre-marital sex, which two young ladies, they did admit that, and, yes, I did call them whores.”

One student who identified herself as someone who regularly attends church, also disagreed with LePelley’s methods. Senior Lashawna Wagner, a secondary education, double major in math and English, said:  “People were yelling back with him  just as much hatred as he was putting forth. You can’t yell at people and make them believe in Jesus. Many times people do say things out of anger to try to propel people out of hell. Choose heaven or hell. No, it’s about choosing Jesus.”

LePelley was accompanied by his wife, Catherine, his child and a traveling minister, Phil Lanz, a retiree from General Motors.

“We try to say it straight up and get it out here,” Lanz said. “The hardest of the people, the children, the young adults, are being stirred up and that’s what we intend to do, is stir them up and get them so they’re thinking.”