Jamrich doesn’t live up to expectations

The newly constructed Jamrich building is a fixture on campus and a place where students will attend class for a long time to come; however, student and faculty concerns have already appeared about the building’s functionality.

The previous Jamrich Hall was built in 1968 and was originally called the I.F. Building, or Instructional Facility. The building was, and still is, named after John Jamrich who was president of NMU from 1968-83.

The school made the decision to replace Jamrich Hall in 2009, according to the Engineering and Planning page on NMU’s website. Constructing a new building was as expensive as retro-fitting.

Hewitt said the classrooms aren’t geared toward the standard lecture-and-take-notes style of teaching, but rather they are geared toward students working in groups to accomplish tasks.

“I like the round tables when they’re being used correctly,” said Hewitt, in reference to the active-based learning rooms, “But a lot of my professors are trying to lecture in those classrooms, and we always have to turn to face the person who’s speaking.”

In some classrooms students seated at the trapezoid-shaped desks have to twist their bodies away from their desks to see the professor while he or she is at the lectern or standing in front of a marker board.

Carol Steinhaus, Ph.D., an associate professor of management, periodically rearranges the furniture in her classroom to better suit instruction, but this constant shuffling leaves the desk pattern influx depending on the class and the professor.

“In the rooms designed as active based learning, students don’t have enough table space and their legs are hitting each other; students aren’t comfortable,” Steinhaus said. 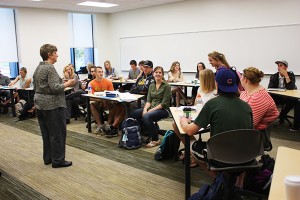 Alex Hawke, a senior accounting major, is irritated with the classroom conditions.

“The furniture is uncomfortable,” Hawke said. “It’s also freezing in there.” Hawke said he often wears long sleeve shirts to keep warm, but then when he leaves the Jamrich building, as he did on Wednesday, “it was hot outside and I was sweating.”

Steinhaus emphasized the problem of student discomfort and the impracticality of lecturing in the active-learning classrooms. She also expressed difficulty in moving the furniture to make accommodations.

“This furniture was made to allow for many configurations, but we don’t want to injure someone or rip up the carpet while we do it,” Steinhaus said.

The total cost of the new Jamrich construction was $33.4 million and a total of $25.05 million was appropriated by the state of Michigan.

“I see the new Jamrich as a great improvement,” Steinhaus said, comparing the new building to the old. “It’s brighter, more up-to-date in terms of wiring and technology, and once the furniture issues are solved, I think we’ll be very happy with it.”