VIDEO: A Chat With a Brew Master

“Choose a job you love, and you will never have to work a day in your life,” Derek Anderson said, quoting the philosopher Confucius, as he paced around the steamy, noisy room. 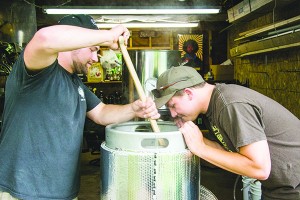 Anderson, or better known as Chumley, has been the brewmaster at the Vierling since 1995, when the Vierling first made their brewery. The Vierling is the second oldest brewery in the Upper Peninsula to be included in the Michigan Brewers Guild with Hereford & Hops in Escanaba as the first.

“Never done it in my life before. Not even home brew,” he said, laughing with a scratchy voice while recalling life in ’95.

Suddenly, Chumley went from being a cook chef to a brew master, and all from learning on his own.

“You can make brewing as simple as a homebrew, a kit on a stove, or all grain which is a step up,” Chumley said, treading around shallow pools of water in the Vierling’s ale-colored brewroom floor.

And that’s the beauty of it. Beer can be made in the kitchen, garage, or at a brewery. The longer you do it, the better too.

“I’ve been doing this forever. I can do whatever I want. I could come up with some flashy beer, ‘Oh let’s make some pineapple-mango-wheat [beer], or something,’” Chumley said.

Brewing beer can be as big as the Vierling, or as small as a homebrew. Either way, brewing good beer can seem like hard work.

For Eric Colbrook and Zane Paquet, it’s anything but. Colbrook, 2012 NMU entrepreneurship alumnus, has been brewing beer for five years in his garage.

“I joined him about eight months ago,” senior human-centered design major and co-brewer Paquet said. “Now I’m addicted. It’s a lot of fun just hanging with the guys. My favorite part is giving our beer away and having [people] try it.”

Together, they call themselves Colbrew, a play off of Colbrook’s last name, and have been constantly making craft beers since then as a hobby.

Many college kids find buying light, flavorless beers like Bud Light or Coors Light more appealing because of their low price. These conglomerates mix rice or corn, which is a cheaper alternative, into their grains.

Colbrook and Paquet said they spend around $50-$80 for a 10 gallon batch of beer. That’s around $3-$5 for a six pack of quality beer. If there’s a deal to be smelt in town, it’s right under their noses.

“We like to switch up our beer and try different things,” Colbrook said.

In the past, the friends have made an orange wheat ale and a ginger IPA, which stands for India Pale Ale, a “hoppy” beer, or more bitter and hop-tasting.

They have even made a raspberry wheat ale with raspberries they picked themselves.

“The most important thing for us to do is to be experimenting with as much ingredients as possible,” Paquet said over the sweet smell of mashed hot barley, comparable to cereal with the looks of oatmeal. “That way we’re constantly learning. I think that’s the funnest part too.”

With it’s recent popularity and interest, people like Colbrook and Paquet see themselves turning their hobby into a newer version of the Vierling, Blackrocks or the Ore Dock.

“Our goal is to have a business and to work together,” Paquet said.

Currently, there are 132 craft breweries in Michigan, with 14 of those located in the Upper Peninsula, with numbers growing quickly.

The Upper Peninsula even has their own U.P. Craft Beer week, which has been going on all this week, concluding with Beer Fest this Saturday. With craft brewing on the uprise, it is smart to get involved now on this effervescent trend.

Whether it is a brewpub like the Vierling or a backyard operation like Colbrew, there is much

effort that goes into the craft of brewing good beer.

If you enjoy a good brew, you’re probably curious as to the ingredients of the bubbly concoction that you are drinking. Craft beers are not to be guzzled down quickly like a cheap date, they are to be slowly and thoughtfully sipped like a long term relationship.

It’s not just the can of Busch Light in your fridge, but a unique, exotic, flavorful brew from the bottle or mug.