For the first time in Marquette, Mich., the Upper Peninsula Rainbow Pride Fest took place this weekend, beginning with an 11 a.m. Pride Rally ‘n Walk, followed by a 7 p.m. drag show Saturday Sept. 6, with festivities occurring at Tourist Park from 11 a.m. until 11 p.m.

Former NMU student, Katlyn Meni, a supporter of Rainbow Pride Fest, said she was impressed by the turnout of the event. 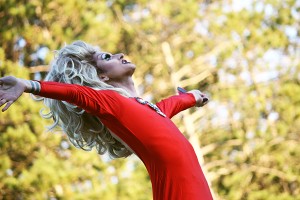 “I used to live in Pittsburgh, Pa. and they had events like this all over,” Meni said. “A lot of people think it’s just about gays, but it’s not. It’s about life.” Meni is currently a Marquette resident.

An NMU student zoology major, the R. Kelly impersonator for the drag show in the evening, said the event had been in the planning process for quite some time, and it finally all came together this weekend.

“They just wanted to make a place where everyone’s comfortable…everyone,” the R. Kelly impersonator, who chose to remain anonymous, said. “When they posted about it, they posted it everywhere. So they don’t just want gays, bisexuals, transgenders, they want everybody.”

The event kicked off at 11 a.m. with the parade, leading from the Marquette Commons Area to Tourist Park, where the rest of the festivities were held. The event consisted of a number of booths from local companies and businesses, as well as local music, like Double Trouble DJs, and an open mic talent session. The event concluded with the drag show.

One of the senior hospitality management majors at NMU participated in the drag show under the stage name Loretta Lovelee.

Dressed in tights and a tunic wrap, Lovelee said the outcome was awesome.

“All day long there’s people coming in and trickling out, and a lot of places are raising money for the women’s shelter and different things around town, as well as their own businesses that they strive to carry, and I think it brings us all together with the school, the community and everyone coming together in one,” Lovelee said. “I was kind of hesitant about some things because a lot of times, when there are pride fests in different areas, there will be protesters and a lot of mean things being said, but when we did our parade, we got a lot of positive feedback, a lot of car horns and a lot of promotion.”

The drag show lineup consisted of two drag kings, Levi Brator and Aléx, and six drag queens, Cheri Poppins, Aurora Gozmic, Mercedes Benzova, Loretta Lovelee, Mamma Taffy and Missionary Mary. Prior to the opening act of the drag show, nearly 200 people were located in the grassy area in support of the event.

Coree Segerstrom, a 2012 NMU cosmetology graduate, took the part of Mercedes Benzova for the night.

Segerstrom helped with the event by attending pride meetings and organizing the drag show.

“It’s a really good eye-opener and it’s nice to have different varieties of people all coming together for one thing,” Segerstrom said as Mercedes Benzova, “And that’s just to be happy and live your life to the fullest.”

The R. Kelly impersonator said he can imagine the event is something they’d like to do every year. He also said drag shows are generally misinterpreted, and that the shows are an opportunity for female impersonation in a fun light.

“I think a lot more people should come. They have this idea, perception, of what it is and really, it’s funnier than you think. I never take them seriously. You shouldn’t.”