The women’s volleyball team travels to conference rivals Northwood and LSSU this weekend as they open GLIAC play. 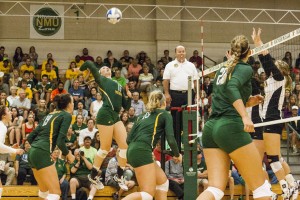 The Wildcats head into the weekend 0-4, after dropping their home opener to No. 3 ranked Minnesota Duluth 3-0 Thursday, Sept. 4 at Vandament Arena.

The ’Cats then traveled to the Keweenaw Classic at the campus of Michigan Tech in Houghton over the weekend, where they lost  3-2 to Upper Iowa University on Friday, Sept. 6.

The next day, the ’Cats lost another pair of games to Bemidji State and Winona State, both by a score of 3-1 on Saturday, Sept. 6.

Junior libero Alex Berger was named to the Keweenaw Classic All-Tournament team for her performance in the tournament digging up 78 attacks in the ’Cats three matches.

Berger is leading the GLIAC in digs with 90.

Junior left-side Lisa Studnicka leads the ’Cats in points with 55.5 through the team’s first four matches.

“Since we’re a fairly new team, we make quite a bit of errors but that’s definitely improving,” Bussell said. “We’re going to have to be competitive, and we’re only getting better as a team. As our games have been going on, we’ve played together more and are getting better every game. Even though we haven’t won, we’ve competed and are fighting hard.”

This weekend will mark the first GLIAC play of the year. Last season, NMU was 15-3 in conference play, and finished third out of 16 teams in the GLIAC.

The ’Cats will play visitor in the Northwood Timberwolves’ home opener at 7 p.m. Friday, Sept. 12 in Midland, Mich. The Timberwolves are 3-1 to start the year, coming off three straight wins over Glenville State (3-0) on Friday, Sept. 5, as well as California University of Pennsylvania (3-2) and Bloomfield (3-0) both on Saturday, Sept. 6. Their lone defeat was a 3-0 loss to Lock Haven University on Thursday, Sept. 4.

All four of the Timberwolves games took place at the Lock Haven Invitational in Lock Haven, Pa.

Last season, the Wildcats fell to Northwood 3-1 in the two team’s only match up on Saturday, Nov. 9 at Midland.

The Timberwolves finished the 2013 season with a 13-5 conference record tied with the Wildcats, and 21-11 overall.

Northwood finished last season fourth out of 16 in the GLIAC.

Head coach Dominic Yoder said the team’s experience playing on the road last weekend will be beneficial on their trip.

“I think we’re ready now after the Keweenaw Classic and the road scrimmages in the preseason,” Yoder said. “We have our bus legs underneath us, and our players always enjoy getting more sleep when we’re on the road, so they’re pretty excited about that.

“The opportunity to play again in front of fans is going to be terrific.”

NMU will finish the road trip at LSSU at 3 p.m. Saturday, Sept. 13 at Cooper Gymnasium in Sault Ste. Marie, Mich.

The ’Cats cross-state rival LSSU Lakers enter the weekend with a 1-4 record.  Their single win was over Finlandia University on Thursday, Sept. 4 in Hancock.

The Lakers dropped four games in the Keweenaw Classic as well, as they were shut out 3-0 by Bemidji and Winona on Friday, Sept. 5.

The Lakers fell to Upper Iowa 3-1 as well as Minnesota Duluth 3-0 both on Saturday, Sept. 6.

The Wildcats swept LSSU in their three-game series last season, two of which came at home in Vandament Arena.

Yoder said the Lakers will be a harder opponent to face this weekend than they were last year.

“They’re another young team with a second year coach heading in the right direction,” Yoder said. “They’re much improved from last year when we had a couple wins over them, but it’s a new season with new teams on both sides, and LSSU’s turning into a competitive program.”

Last season, the Lakers ended the season with a conference record of 2-16, and 4-24 overall. LSSU finished 15 out of 16 teams in the GLIAC.

Freshman setter Jami Hoogeboom said the team is building success off their experience.

“We do a really good job giving each game all we’ve got,” Hoogeboom said. “We fight for each point, and if we make a mistake, we make sure we’re short-minded so we can bounce back and get that next point.

“With each game, we can learn something about us as each game is a new experience and a new opportunity. Those experiences will help us get some wins and work on being a team, and we’re going to have to keep that up in conference games.”