A passion fruit drink special called “Ray Rice Punch” offered at the Wild Rover on Saturday, Sept. 13, has launched a social media frenzy about whether the drink was in poor taste. 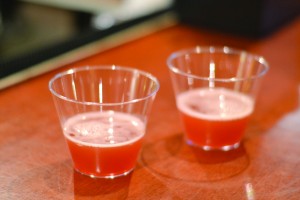 Ray Rice, born Raymell Maurice, was an NFL running back for the Baltimore Ravens until he was suspended indefinitely from the NFL on Monday, Sept. 8 for domestic violence against his wife, Janay Palmer Rice.

A video was released in which Rice appeared to be dragging his then-fiancee out of an elevator. She looked to be unconscious.

A photo of the drink special written on a chalkboard was shared on Facebook by 2012 NMU graduate Justin Carlson via a friend.

Carlson is a Republican candidate for Marquette County District Two. The Facebook photo within a day accumulated 76 shares and 58 comments.

Though Carlson was not present on the night of special, the comment stream on the photo he shared ignited a significant debate not only about the drink name but also about First Amendment rights and social media.

“I saw the photo and was shocked that a local business would use such a method to market,” Carlson said. “I can’t really say how it will affect their business, although I did hear from many people who said they would not be giving them any more business.”

Carlson said the drink special didn’t seem to be a product of the management or ownership of the bar, but a careless mistake of a late night bartender.

“I think this was a really good example of how social media can bring a lot of attention to something as small as a drink advertisement at a bar, whether or not that attention might be justified,” Carlson said.

North Wind reporters dispatched to The Wild Rover were able to get the Ray Rice drink ingredients, which previously had been undisclosed.

The Wild Rover General Manager Lorne Washburn said he didn’t know the ratio of the ingredients because the drink was originally requested by local tourists on Sept. 13.

A large pitcher was made following their suggestions.

Several North Wind editors, who are older than 21, said the drink tasted like a batch of Skittles.

Washburn said the controversy had ignited media interest. On Wednesday a television reporter tried to track him down all day.

“The Wild Rover would like to publicly apologize for the name of a drink special that was ran on Saturday night,” Washburn said in press release. “It was never intended to make light of domestic violence. The decision of the ployee to run that drink special was made in poor taste.  The gravity of the situation is being taken very seriously, and the matter is being handled internally with appropriate measures and course of action.”

“It is not the views or the opinions of the Wild Rover, its owners, or management team that domestic violence is acceptable.  We apologize to all offended for the lapse of judgement and are working to rectify this matter as soon as possible.”

Washburn said the bar intends to donate to several area women’s shelters to show support for women who have dealt with this situation.

Some students, like Eric Hicks, senior engineering major, were not affected by the controversy.

“It didn’t affect my opinion of The Wild Rover,” Hicks said. “I think that drink has more of a punch than Ray Rice, and they were only doing that to sell drinks, no harm intended.”

The controversy surrounding the Ray Rice situation is not limited to The Wild Rover. Rice’s original suspension sparked national discussion about professional athletes and domestic violence. However, a second video was released with footage from inside the elevator. This video revealed Rice punching Palmer in the face in the elevator, which caused her to fall, hit her head and become unconscious.

With proof of Rice hitting Palmer, Goodell made a second call to eliminate Rice from the NFL indefinitely. However, Goodell still came under fire by fans suggesting his harsher punishments should have been instituted long before the second video.