’Cats and dogs battle for Miner’s Cup on homecoming

The football team will return home this weekend to face their rival, the Michigan Tech Huskies, in a homecoming matchup at 7 p.m. Saturday, Sept. 27 in the Superior Dome.Head coach Chris Ostrowsky said homecoming is a great experience for everyone at NMU.

“Homecoming is a great event on every campus in America,” Ostrowsky said. “It really gives the student body and alumni a chance to reconnect and create a celebration, and it’s really unique with every school across the country.”

The Wildcats are coming off a 13-10 loss to the Hillsdale Chargers on Saturday, Sept. 20 in Hillsdale, Mich. Sophomore quarterback Shaye Brown was 21-41 in passing, throwing for one touchdown and 295 yards, the most yards he’s thrown for in a game during his career as a Wildcat. Junior running back Wyatt Jurasin gained 114 yards on 28 rushes, and sophomore wide receiver Gabe Eppert brought in 96 yards and the ’Cats’ only touchdown. 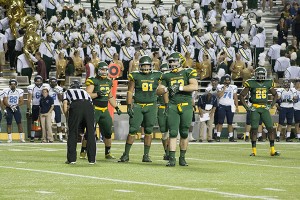 Trailing by three points late in the fourth quarter, NMU had a chance to tie the game and force overtime, but a missed 33-yard field goal attempt by freshman kicker Ryan LaBerge went wide left of the uprights, giving the Chargers the ball with 31 seconds remaining on the clock.

The loss drops the Wildcats to 0-2 in the GLIAC and 1-2 overall, and they are sitting sixth out of eight teams in the GLIAC North Division.

Senior receiver Kelvin Smarwt said despite the loss, the team is seeing improvement.

“We’re starting to really execute the ball and the whole team is getting better every game,” Smarwt said. “The defense is carrying us, and now we have to start coming up with big plays when the chances are there. We’re going to keep bringing our high energy and start finding the wins.”

On the season, sophomore quarterback Shaye Brown is 54 for 93 on passing with a 58 percent completion rate, and has thrown for 729 yards, three touchdowns and three interceptions for a 128 NCAA quarterback rating. Brown is third the GLIAC out of 15 teams in passing yards.

Smarwt is leading team receivers with 277 yards and two touchdowns on 18 receptions. Junior running back Wyatt Jurasin has gained 303 yards on 73 rushes, averaging 101 yards a game.

On defense, sophomore defensive back Pat Ryan has brought in two interceptions, while sophomore linebacker Julian Hornback is leading the team in sole tackles with 17. Junior linebacker Levi Perry has 16 tackles, averaging eight a game.

Michigan Tech heads to Marquette with a  3-0 record, sitting at first place in the GLIAC. The Huskies defeated Saginaw Valley State 26-20 in their homecoming last weekend on Saturday, Sept. 20 in Houghton, Mich.

Senior quarterback Tyler Scarlett is at the helm for the Tech offense, where he has completed 56 of his 89 passes this season for 604 yards, six touchdowns and zero interceptions. Senior running back Charlie Leffingwell has 59 rushes through his team’s first three games, and has racked up 293 rushing yards with three receiving touchdowns. Sophomore wide receiver Brandon Cowie is leading the Huskies receivers in yards with 211, while junior receiver Anthony Root leads all receivers with three touchdowns on five receptions.

The Huskies have won the last four matches against the ’Cats, and have taken 10 of the last 13 games in the series. The Last time NMU defeated Tech was in 2009, when the ’Cats earned a 48-16 win on Saturday, Sept. 19 at Sherman Field in Houghton.

The two teams will be battling for the Miner’s Cup on Saturday, which is the trophy that has been handed out to the winner of the rivalry annually.

The trophy, which is shaped as a miner’s helmet, was created by the Michigan Tech Athletic Department along with their Army ROTC program in 2002, and has been handed out 12 times, nine of which were awarded to the Huskies.

“It’s a battle for U.P. dominance,” Brown said. “We’re the only two real big football teams in the U.P. and we’re hoping to bring home the bragging rights. We’re excited, it’s a great rivalry that’ll bring a great atmosphere. We’re hoping the game is going to be packed and we can get the win.”

Tom Kearly is in his ninth season as head coach of the Michigan Tech Huskies, and has brought in over 50 wins for their program in his time.

Ostrowsky said the game will be one to remember for years to come.

“I’m pretty excited to play the game and I think the player base will be just as excited,” Ostrowsky said. “It’s a venue and a crowd that will create memories that these guys can take with them. Twenty years from now, these guys on our 2014 football team can come back and say ‘we remember homecoming that year we beat Tech,’ which is going to be really cool for them and everyone else who’s going to be at the game.”