A group of public relations and environmental studies students from Northern Michigan University took an opportunity to visit Eagle Mine Friday, Oct. 3, to understand how the mining tours are presented and what the mine has to offer in regards to environmental issues. 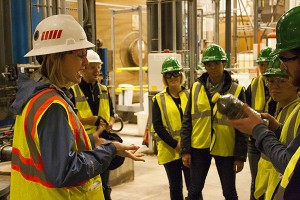 Senior public relations major Chris Salgot attended the tour. Salgot said prior to the mine tour, he thought of mining as having a negative impact on the environment.

“It is not a sustainable practice and I’ve always believed that mine companies have no incentive to properly conduct mine closure and reclamation of the land,” Salgot said. “After the mine tour, I learned more about the strict regulations mining companies are under and all the testing the EPA does to ensure environmental quality.”

Eagle Mine’s communities coordinator and 2008 NMU graduate Meagen Morrison said this is the fourth season Eagle Mine has provided tours that are open to the public.

The mine faced a number of criticisms in the early stages, including a request by Huron Mountain Club in 2012 to stop construction at the mine site. According to an article by uppermichiganssource.com, the request was denied by a federal judge.

Eagle Mine, a subsidiary of the Lundin Mining Corporation, was formerly owned by Rio Tinto. Prior, it had been the Kennecott Eagle Minerals Co.

An article published by “Save the Wild U.P.” in May 2013 discussed the environmental concerns Marquette citizens had toward the mine.

In order to address the concerns of the citizens, Eagle Mine has opened themselves up to public forums to discuss any questions people may have about the mine and its purpose.

“At the forums we get a mix of opinions about the project,” Morrison said. “We just try to do the best we can to answer any questions they may have.”

The tour consists of a bus ride out to Champion, Mich., about 33 miles west of Marquette. Along the way, Eagle Mine employees will prepare the tourists with information about the mine and the work they are doing to take precautions for the environment.

NMU graduate Dan Blondeau, senior adviser for communications and media at the mine, said most visitors to the mine are in the 60 to 65 year age bracket.

“We get a lot of retired miners, so a lot of times they’ll be asking about the different things in the past from today,” Blondeau said. “Today we use different equipment, we use different environmental protections. There’s a lot of questions on those differences and we’ll kind of fill the gap on how we used to do things.”

Upon arrival to the mine, tourists are able to take a bus tour to see the water treatment facilities and the portal that leads underground. Tourists are not able to travel through the portal, but the mine will open mill tours next spring.

Eagle Mine is sponsoring several open forums at the end of the month with a chance to win an exclusive trip through either the mine portal or the mill tour. Blondeau said the Eagle Mine Facebook page lists the upcoming community forums for those who would like a chance at one of the two tour options.