After dropping their third straight loss this past weekend, the Wildcats will travel to Malone University to take on the Pioneers at 2 p.m. Saturday, Oct. 11 in Canton, Ohio.

NMU lost to the Saginaw Valley Cardinals 14-7 Saturday, Oct. 4 in Kochville Township, Mich. Saginaw was winless heading into the game, and the Wildcats held a  seven point lead through the majority of the game after sophomore quarterback Shaye Brown found junior receiver Marcus Tucker for a 10-yard touchdown with eight seconds remaining in the first quarter. 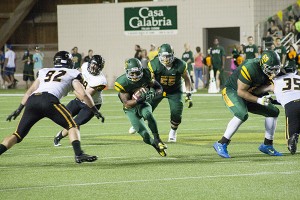 Neither team scored until Saginaw Valley tied the game with 7:25 remaining in the fourth quarter as junior quarterback Keith Moore connected with junior receiver Bryan Fobbs for a 17-yard touchdown.

The Wildcats had the chance to take the lead in the final minute of the game when their offense reached midfield, before Brown threw his sixth interception of the season to senior defensive end Murtada Jabbie, which Jabbie returned for a 48-yard touchdown, giving Saginaw a 14-7 lead.

On the next drive, the ’Cats put together a 55-yard drive to the Cardinals’ 15-yard line to try to tie the game, before Brown threw another interception, this time to sophomore defensive back Matt McKoy at the one yard line to end the game.

Saturday was the third straight game in which the Wildcats lost by one score.

“If you watch us play, you can see that our games are really close,” Ostrowsky said. “At the same time, it’s time to get it done. We have to keep chopping away, and the thing as a coaching staff that makes us feel good is that our players believe in what we’re trying to accomplish here, and as long as that’s in place we have a great chance to be really good.”

Brown completed 16 of his 34 passes in the loss, throwing for 184 yards, one touchdown and three interceptions.

Junior running back Wyatt Jurasin rushed for 86 yards on 20 attempts, while junior receiver Trey Hipke led the ’Cats in receiving yards with 59. The Wildcat defense held Saginaw’s offense to 299 total yards. Junior linebacker Levi Perry and sophomore linebacker Dalton Stenberg each had 13 tackles in the game.

With the loss, NMU dropped to 0-4 in the conference, 1-4 overall. The ’Cats sit last out of eight teams in the GLIAC North Division. Junior outside lineman Kyle Steuck said the team knows what adjustments need to be made to turn around their season.

“I wouldn’t say we did a lot of things wrong against Saginaw. We had some unlucky bounces against our way,” Steuck said. “We went out and executed and didn’t play as well as we wanted to obviously, but it’s just the little things.

“We have to start getting in the mindset to do what it takes to get the win. Coach gives us great game plans every single week and put us in the position to win, and we have to start executing those game plans 100 percent perfect every week to go out and get a win.”

On the season, Brown has thrown for 1,167 yards and seven touchdowns with seven interceptions. His longest completion has been for 45 yards. Brown is fifth among GLIAC quarterbacks in average passing yards per game with 233.4.

Jurasin has rushed for 450 yards and three touchdowns. Senior Kelvin Smarwt is leading receivers in yards with 308 and one touchdown.

Tucker is leading receivers in scoring with three touchdowns. Senior defensive lineman Trever Kruzel has the second most sacks in the GLIAC with four.

The ’Cats’ next opponent will be the Malone Pioneers Saturday afternoon. Malone is 0-5 on the season and sit last out of seven teams in the GLIAC South Division.

Malone is the only winless team overall in the GLIAC. Last weekend, the Pioneers fell to Ashland University 42-13 Saturday, Oct. 3 in Ashland, Ohio.

Jones saw the most playing time out of the three, where he completed eight of his 15 passes for 60 yards and one interception. Freshman receiver Eian Elsass caught the team’s only receiving touchdown.

On the season, Malone’s sophomore running back Ronnie Beers leads his team in rushing yards with 215 on 35 rushes. Junior running back Justin Davis has 124 yards on 49 rushes with seven fumbles.

The Wildcats’ offense has averaged 18.4 points per game, while their defense is giving up an average of 19.6 points. This will be the first-ever meeting between the NMU and Malone football programs. The Pioneers joined the GLIAC during the 2012 season.

Tucker said the ’Cats’ offense needs to start making plays to find a win at Malone. “We need to step with our own self-inflicting wounds,” Tucker said. “From dropped passes and not finishing plays, we need to worry about making ourselves better on the offense.

“Our defense has a heck of a group of guys that are making plays and flying around, and it’s the best group I’ve seen on that side of the ball since I’ve been in this program. I’m looking forward to seeing how our team is going to step up to the task on the road this weekend.”