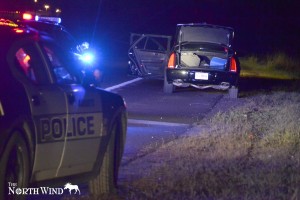 A road rage assault that turned into an unarmed robbery outside of the Ace Hardware in Harvey caused the Chocolay Township and Marquette City Police department to set up an armed blockade on US-41 early Saturday morning, Oct. 11.

The incident began when people in two vehicles were involved in a road rage dispute and pulled over into the Ace Hardware parking lot, according to the Chocolay Police. The incident erupted into a confrontation and two male victims were assaulted and reported that they had items stolen from them. Calls were then fielded to the Marquette Police Department that a black Cadillac containing suspects was approaching the city on US-41.

Traffic was stopped on US-41, and a search of the vehicle was conducted. Three male subjects were arrested by Chocolay Township police. The two victims, who were being treated for head wounds at the time, approached the scene in an ambulance to assist in identifying the three suspects who assaulted them. The suspects were then transported to the Marquette City Police Department in separate vehicles where they were lodged for assault and unarmed robbery.

No names will be released until they are arraigned on Monday. Chocolay Township Police were assisted by Marquette County Police and NMU Public Safety.