On Wednesday afternoon, the prosecution rested its case against Big Bay resident Michael Nelson, who is charged with being involved in a hit and run accident that caused the death of NMU’s Registered Dietitian Robin Rahoi on Dec. 17, 2013 on Lighthouse Road in Big Bay. 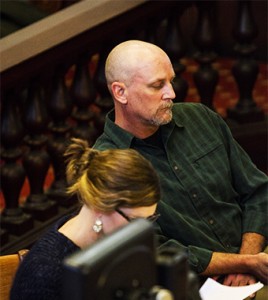 The defense will begin presenting its case on Thursday, Oct. 16. Detective Sgt. Christopher Crowley testified that the police did not have a recording device when interviewing Nelson at his home after a tip that lead them to Nelson.

Crowley testified that Nelson admitted to hitting something on County Road KCB Lighthouse Road in Big Bay. Crowley said Nelson did not think that it was a person, but rather a log or piece of wood that he hit.

Nelson also denies that he ever backed up his vehicle at the scene, according to court testimony.

Also on Tuesday, Forensic Scientist Jennifer Patchin from the Michigan State Police post in Grayling, Mich., testified via video conference that several plastic pieces at the scene were recovered, and they matched the front of Nelson’s Jeep Grand Cherokee.

She also noted some plastic materials fell out of Rahoi’s clothing during her autopsy. However,  she was not able to specify if it was from Nelson’s vehicle.

Nelson claimed during his first police interview that the blood and hair particles found on his front bumper were from when he hit a German Shepherd a year earlier.

On Wednesday, Pathologist Dr. George Krzymowski testified that Rahoi’s body had markings and injuries that were consistent with similar pedestrian accidents he has examined in his career 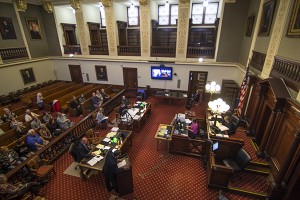 He testified that a direct blow to the head caused Rahoi’s death. He also testified that the speed of the vehicle that hit her was traveling around 30 mph, consistent with the speed limit of Lighthouse Road.

The Prosecuting Attorney Matt Wiese questioned Krzymowski about Rahoi’s body position when she was hit. Wiese suggested that Rahoi could have been in a squatting or kneeling position at the time of impact.

Krzymowski acknowledged that was possible. Krzymowski also noted that there were no tire tread marks on Rahoi’s hands, or any sort of tire tread marks on the body itself. Tire marks were not recovered at the scene because of snowy conditions. The defense will begin calling its witnesses to the stand at 8:30 a.m. on Thursday, Oct. 16 at the Marquette County Circuit Court.