After four straight weeks of losses by less than seven points a game, the Wildcat football team has five weeks remaining to prove they can finish the season with more than one victory for NMU. Head coach Chris Ostrowsky said each week this season has resulted in a little different story. 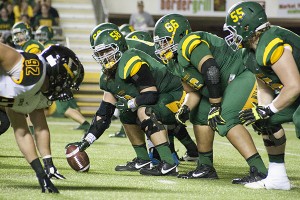 Last week, Saturday, Oct. 11, the ’Cats lost 42-35 on the road to the Malone University Pioneers in overtime. The victory was the Pioneers’ first of the season, and their first conference win since Oct. 2013.

The Wildcats lost the lead with two and a half minutes left of the fourth quarter as Pioneer senior wide receiver Josh McLaughlin completed a 62-yard pass from freshman quarterback Kaleb Scott to tie the game at 35.

“We’ve lost four games in a row on the last play of the game,” Ostrowsky said. “On the last play of the game, four weeks in a row, it’s definitely a different deal. It’s different when you’re in our situation than when you’re getting beat significantly.” In overtime play, Pioneer sophomore running back Ronnie Beers scored a touchdown and the Wildcats were unable to reciprocate.

On the last play, junior running back Wyatt Jurasin rushed for seven yards to the Malone two-yard line and fumbled, which was recovered by the Pioneers to end the game. Ostrowsky said now it’s up to the team to realize the effort that needs to be made in the last-minute situations they’ve been faced with.

We’re going to put those games in the past and finish this season strong,” Krause said. “We’re a touchdown away from (winning) every game. It hurts, but we’re going to keep going and we’re going to come back.”

After sitting last year as a redshirt, the ’Cats started Jaranta Lewis at quarterback for the first time.

Lewis also ran the ball in three yards for the first touchdown of the game.

This weekend, the Wildcats face the 3-3 Wayne State University Warriors, as the ’Cats host both Family Weekend and Band Day, beginning at 1 p.m. Saturday, Oct. 18.

“Wayne State is a heck of a football team, they’re a heck of a program,” Tucker said. “They’re only a couple of years removed from the National Championship, so last year they came in here and we were fortunate enough to get a victory, but I think it’s going to be really tough for us to get a win from those guys.”