Michael Nelson was convicted in Marquette County Circuit Court with failure to stop at the scene of an accident that resulted in the death of NMU’s registered Dietitian Robin Rahoi. 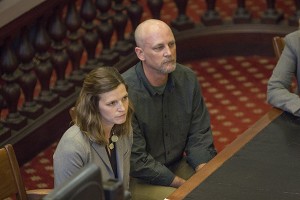 Circuit Court Judge Jennifer Mazzuchi will determine the minimum sentence under Michigan guidelines in the upcoming sentencing. The maximum penalty for the conviction is five years. The prosecution decided to seek a lesser penalty.

“We did simulations with his vehicle and made a determination that the striking of the victim with his car was not something that he was at fault for, so we took the charge from a 15-year felony to a five-year felony because of that, and that was the whole issue here,” Marquette County Prosecuting Attorney Matthew Wiese said. “It boiled down to did he know, or should he have known.” 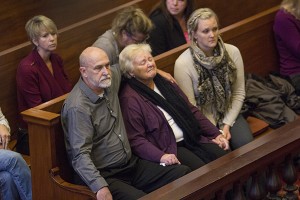 Wiese said the Michigan State Police did a very thorough job with the investigation and the evidence they collected. He said the crucial evidence in the investigation included evaluations by Sgt. Specialist John Bruno and autopsy evidence from medical examiner Dr. George Krzymowski. He also said the forensic pathologist, Werner Spitz, offered some degree of useful evidence as a witness called by the defense.

Members of both the Rahoi and Nelson families declined to comment following the closing of the case.

According to the prosecutor, the Rahoi family was relieved, but the case did nothing to undo the situation.

“Their whole thing was, they wanted some acknowledgement that this act happened and that it should not happen,” Wiese said. “The act I’m referring to is the leaving part, not the striking of their family member.” The defense attorney did not have any comment about the verdict. A sentencing date will be schedule in the next four to six weeks.