The One Book, One Community program’s selection this year is one of relevance to people from Michigan and Midwesterners alike. This year’s selection is “Detroit: An American Autopsy” by Charlie LeDuff. 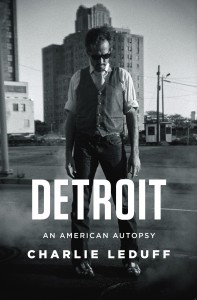 Dana Schulz, a One Book, One Community selection committee member, said she thinks the relevancy of the book to Midwesterners is the reason the book is causing a buzz in the Marquette community.

“What is particularly exciting about the book is the Michigan connection,” Schulz said. “This is a very visceral book and many people in the Marquette area and the Midwest have ties to the city of Detroit.”

In compliance with the One Book, One Community’s selection criteria, the committee is to select at least one related event for the book they select prior to the author speaking about the book on NMU’s campus. This year there are four events. The committee is sponsoring a series of Detroit-related events to complement this year’s selection.

The film “Burn,” played on Oct. 14 in the Jamrich Hall auditorium. The film is the winner of the 2012 Tribeca Film Festival Audience Award. The film depicts the life of the Detroit Fire Department who are not only up against fighting fires but also inadequate resources and government funding.

Last week, a book discussion was held at Snowbound Books on Third Street.

Cathy Seblonka a One Book, One Community committee member and program coordinator said this year’s selection has inspired lively and intelligent discussion like none other in years prior.

“The author is tough, the story is not a pretty picture,” Seblonka said. “If people want just a book that is fluffy and pretty they won’t appreciate this book so much, but for a book that is both real and really fascinating to read, it has made our community members want to speak up and talk about it.”

A concert of Motor City music was performed at 7 p.m. Wednesday, Oct. 29, in the community room in the Peter White Public Library. The performance featured an array of Detroit-born music, including blues, jazz, R&B, Motown, pop and soul from musicians Dave Zeigner, Paul Neumann, Derrell Syria and Gary Parkkonen.

A panel discussion about the status of modern-day Detroit is scheduled for 7 p.m. Monday, Nov. 10, in a location yet to be determined.

Carter Wilson, Ph.D., NMU political science professor, department head and expert on poverty in Detroit and race relations will be one of the panel members participating in the discussion. Wilson specializes in public policy, American government and public administration. Wilson has done research on the growth of concentrated poverty in the city of Detroit.

Wilson said Detroit is sort of a tale of two cities. On one hand, there is vibrant economic activity and on the other hand there is severe depression.

“Detroit is going through bankruptcy. It’s a city with severe financial crisis and a city that is in severe decline,” Wilson said. “Then there are signs of potential, like the growing riverfront in Detroit, the music venues and all sorts of restaurants popping up near the sports stadiums.”