A week after The North Wind revealed details of the university’s contract with Starbucks, NMU’s financial officer defended the coffee deal saying the university’s Starbucks franchise had $383,000 in sales last year.

You can see a portion of NMU’s Starbucks Contract Here.

“The sales numbers show that there is a strong customer base among the NMU community,” said Gavin Leach, vice president for finance and administration. “For those who prefer a less expensive coffee, we offer the Stone Creek brand at most of our other university retail outlets, thus, providing the best of both worlds to our NMU coffee drinkers.” 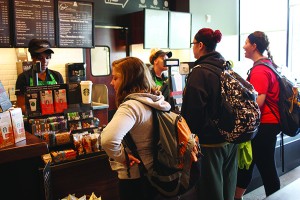 “NMU’s agreement with Stone Creek was for the right to sell that brand of coffee on campus,” Leach explained by email. “The agreement we have today with Stone Creek is exactly what we had prior to the new Jamrich facility being built. Nothing related to that agreement has changed.”

“NMU primarily views the Starbucks franchise as a way to offer access to a very popular, internationally recognized quality brand retail coffee outlet for our students,” Leach said. “The university selected Starbucks because of its excellent reputation and quality product line and negotiated a fair price for those products to offer it as a choice for our students.”

But students and faculty said this week they are not convinced that the contract is in their favor.

Justin Gunn, a senior entertainment and sports promotion major, said he believes, because  Starbucks CEO Howard Schultz is an alumnus, NMU should not have to pay large fees to have a franchise located on campus.

“I just feel that it’s wrong to pay that much to have Starbucks on campus when we could have Stone Creek for a lot less, and way better coffee,” Gunn said. “I don’t think that Northern should be keeping these things secret from its students and they shouldn’t be entering into these secret agreements, especially when the Starbucks CEO went to school here.”

The North Wind staff began asking for the Stone Creek and Starbucks contracts  on Sept. 17. The university asked for an official Freedom of Information Act request. The request was filed on Oct. 3.

After a week, the university took a 10-day extension and then came back to say it couldn’t release the Starbucks contract citing a confidentiality clause.

Open records experts consulted by The North Wind said such a confidentiality agreement violated state laws for public institutions. On Oct. 28, the university released the Starbucks contract, two business days after the FOIA extension deadline. FOIA rules require institutions to cite specific exemptions in the law when they deny documents. NMU failed to cite an exemption that allowed it to deny the records nor did it provide the required information on how the newspaper could appeal its decision.

The Stone Creek contract cost the university a total of $1,595 over a two-year period.

Junior nursing major Rachel Klitzke said she enjoyed having Stone Creek on campus as an alternative to Starbucks.

“I think we should have kept Stone Creek because it’s more practical to have more than one coffee option on campus,” Klitzke said. “With only one option, it takes a really long time to get your coffee now.”

Alan Willis, Ph.D., an NMU history professor, said he believes the university knew what they were doing was wrong and that is why a “confidentiality clause” was enacted in the contract.

“Obviously they were trying to hide something or they wouldn’t have done this,” Willis said.

Overall, Willis was disappointed in the previous administration’s decision to engage in what he believes were unlawful contracts, especially considering that the university employs lawyers. He said he feels there may be an existing distrust between faculty and administration.

“This is just one example of the total lack of transparency that the previous administration and leadership had,” Willis said. “It’s just another example of how big of a problem Erickson has if he wants to change that culture of distrust.”

Willis felt strongly that the university should not have entered into a contract with a confidentiality clause.

“If you have a public institution like Northern that’s funded largely by taxpayer money that has a governor appointed board of trustees, it is not allowed to act confidentially to hide these types of business transactions which are clearly designed to profit, in this case, the corporation of an alumni,” Willis said. “It’s unfathomable.”

Jon Brady, a senior finance and risk management major, said the original article made him think about the bigger picture behind university spending and budgets.

“It makes you want to look more in depth at what’s actually going on because it is a public university and you do pay money to be here,” Brady said. “It makes you wonder where it’s all going.”

Brady said he hopes that this information will make more students want to become aware of what the administration is doing.

“I don’t think a lot of students think about where their money is going honestly,” Brady said. “This may make people question the administration, which is a good thing. Question everything.”