Four public relations students have come up with a campaign to reduce the carbon footprint, emissions of greenhouse gases and new environmental-friendly tactics to make NMU an even greener place for future generations of wildcats to come. 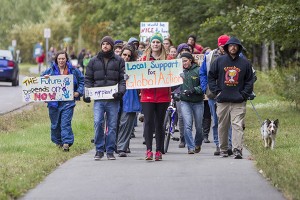 “We have a green image here at NMU, but it’s about time we turn that image into actions,” Alyson Obermiller, junior public relations major, said.

The call to arms to improve environmental friendliness and sustainability is inspired by Obermiller and her three group partners in a public relations environmental campaigns class. Jacob Stipe, another group member and senior public relations major, said the group merely started with a simple idea that could lead to tremendous change on campus here at NMU. “For our project we took this idea of making Northern more green and designed a public relations campaign to achieve that idea,” Stipe said.

The group plans to achieve their goal of a greener campus by proposing to NMU administrators, such as President Fritz Erickson and the board of trustees, to commit and adhere to the American Colleges and Universities President’s Climate Commitment (ACUPCC) policies and procedures. The main goal of the ACUPCC is to make universities achieve carbon neutrality. This process begins when a university president or chancellor signs the climate pledge.

Obermiller said this could be achieved by having a sustainability team on campus, which is something that NMU does not have.

“I think that having a sustainability team, a group of students that monitor, create and promote campus sustainability, is something NMU can really benefit from,” Obermiller said. “Currently it’s our facilities office that is taking care of our recycling and they’re stretched very thin.” The second step is to initiate two or more of the following tangible actions to reduce greenhouse gas emissions while the more comprehensive plan is being developed.

This includes requiring a campus building at least meet the U.S. Green Building Council’s LEED Silver standard, adopting an energy-efficient appliance purchasing policy, encouraging the use of and providing access to public transportation and producing at least 15 percent of our institution’s electricity.

Stipe said this is the part of the climate pledge that really makes it so achievable and measurable for NMU, because within this step our campus is already doing much of what the ACUPCC is asking.

Stipe said NMU has already taken the following green initiatives: four residence halls are LEED silver certified including Meyland Hall, Hunt Hall and VanAntwerp Hall, there are Energy Star washers and dryers in the dorms, Checkered Cab buses take students to and from the PEIF. According to Stipe, the Ripley Heat Plant in town produces 16 percent of our electricity needs and 87 percent of our thermal needs.

The third and final step of the climate pledge is to make the action plan, inventory and periodic progress reports publicly available by submitting them to the ACUPCC reporting system.

Both Obermiller and Stipe said the group is currently working on gaining student support by having students sign petitions they will take to NMU’s student government, who will then be in correspondence with Erickson and the board of trustees for final approval.

Obermiller said though their group is currently working on collecting signed petitions from the student body, she is excited about the potential of the campus climate pledge if everything goes according to plan.

“If this does end up going through, I think on campus you’ll see students using the public transportation more, you’ll see a lot more retro-fitting projects like updating to low flow toilets and sensor lights and our buildings being LEED standard certified.” Obermiller said.

Another group member, Steffi Mosschetti, a senior communication studies major, said the project is daunting but can be possible if the student body is supportive.

“It sounds like this big crazy monster, but it’s time to be innovators,” Moschetti said. “Northern has this green image we promote, now we need to have green action. This is one way we can make that image become reality.”